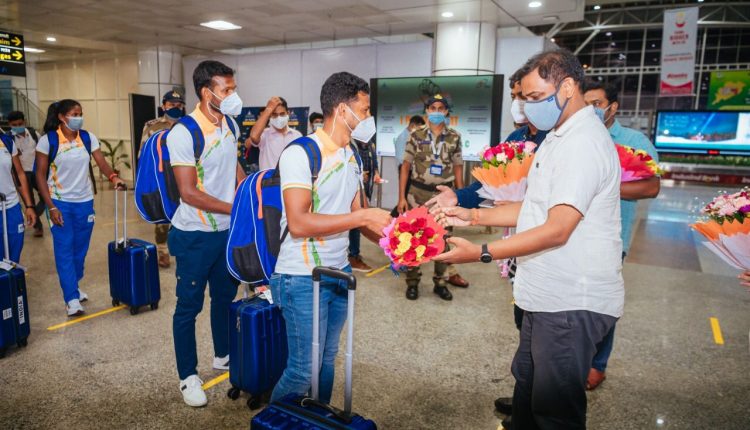 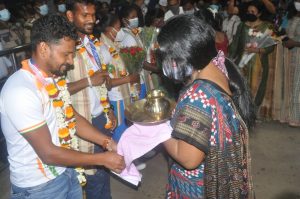 The state has been abuzz with excitement ever since their names were announced in the team squads and as they moved through the league stages and progressed into the knock outs,  there was a sense of pride. Once the teams scripted history, qualifying for the semi finals,  it became a moment of  glory for Odisha too as the state has partnered with Hockey India to sponsor the Indian National teams, men and women, for a period of five years starting 2018 and support the players in their journey to excellence.

“While a dream campaign came to an and, it ushered a new era for Hockey and Odisha is proud that players from the state are forever making their mark in the international platform and this time on they have brought glory not only for their state but the entire nation and we are extremely proud of each one of them. Our Olympians have inspired a generation of young hockey players and will Hockey surely will scale greater heights from here on, shared Behera. 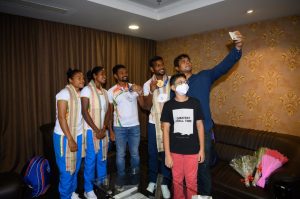 Tomorrow, Hon’ble Chief Minister of Odisha, Sri Naveen Patnaik will be felicitating the four players for their Olympic achievements.

Welcoming the players, Dilip Tirkey, said, “It is after 41 years that India has won a medal in hockey. The Indian women’s team has also performed exceedingly well against some of the top teams in the world at the recently concluded Olympics. It is a matter of great pride for Odisha Hockey that four of our own played a significant role in making this miracle happen for India!”

The Indian men’s hockey team, which ended a 41-year medal drought by clinching a bronze medal in Tokyo, rose to 3rd in the International Hockey Federation (FIH) World Rankings while the Indian women’s hockey team, moved up to the 8th position according to the latest FIH world rankings. 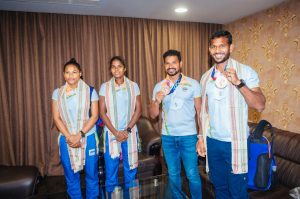 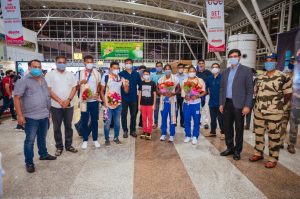 Birendra Lakra, the legendary defender from Odisha was selected  as co vice captain of the men’s team for his second Olympics after missing out on the bus in 2016 because of injury. He attained 200 caps at the Games and  stood tall in India’s defense line with his performance at the group stages that helped the team qualify into the Quarterfinals.

If there is anyone who deserves the maximum applause after goalkeeper Sreejesh for saving numerous penalty corners, then it’s Odisha lad, Amit Rohidas. Amit has proved to be one of the best first-rusher seen at the Tokyo Olympics.

Deep Grace Ekka was named as the joint vice-captain of the Indian women’s hockey team for the Tokyo Olympics. She has been one of the most consistent guarding the defense almost single-handedly. Deep didn’t disappoint in a single match at the Olympics. In the knock-out matches, she almost played all the 60 minutes of the game. Her staying on the pitch for maximum time speaks volumes about her fitness and mental strength.

Namita Toppo with 165 caps to her name and one of the most experienced players in the Indian Women’s Hockey Team was named in the 18-member squad for the Olympics, making it her second consecutive Olympics after Rio 2016. She has been a regular member of the Indian women’s team ever since she made her debut.