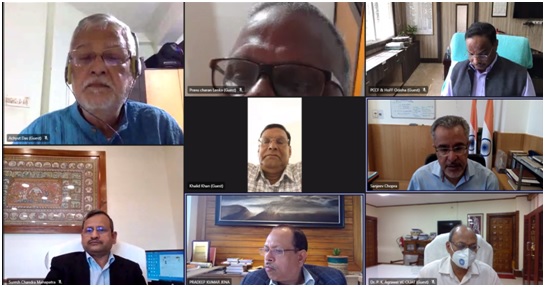 Mahapatra said, “Jackfruit has high nutritional value, and the agro-climatic conditions of Odisha are suitable for its production”. He directed the department of horticulture to popularize cultivation of jackfruit with necessary supports like quality planting material, post harvest processing, value addition and marketing. He added that Jackfruit could be branded and popularized as a super-food among the people.

Further, Mahapatra directed to identify the potential areas where jackfruit could be cultivated in large patches. The department was asked to explore all possibilities for promoting it in the areas where people had traditional skill for jackfruit cultivation. Development Commissioner Pradeep Kumar Jena asked the department to work out a detail plan with inputs from the thematic experts.  The experts suggested to glamorise the food items processed from jackfruit through jackfruit festivals at different levels.

Additional Chief Secretary Mr Chopra appraised that as per available information, Odisha was the second largest producer of jackfruit next to Tripura. Jackfruit trees were found distributed in all most all districts of Odisha. However, around 15 districts contributed major portion of the jackfruit production in the State.

Mr Chopra added that Jackfruit trees were mostly confined to forest areas, backyards, waste lands, and road sites with around 3.15 MT of production per annum. Out of the total produce, around 55% were consumed raw as a good vegetable, and around 35% were consumed as a ripe fruit mostly in festivities. As per local climatic conditions, around 50 blocks in the State were found more suitable for large scale jackfruit production on commercial scale.

Chief Secretary directed to create extensive awareness about the nutritional composition of jackfruit along the lines of millet mission activities so that its commercial production would be taken up by the farmers. He also directed to promote local entrepreneurship for setting up post-harvest processing, and value addition enterprises on different verities of jackfruits. He also directed to increase the area under jackfruit cultivation in convergence with ongoing horticultural schemes and MGNRGES.

Another 3,624 COVID-19 patients recover in Odisha