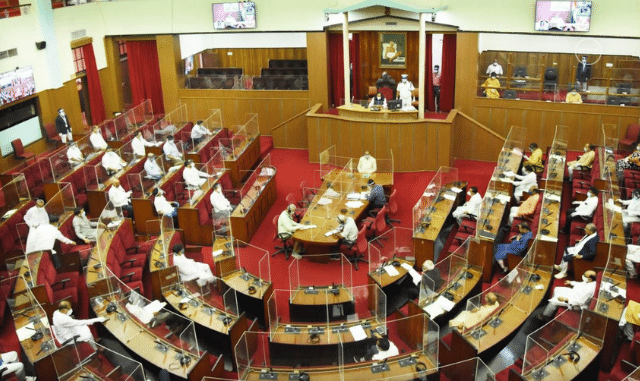 Bhubaneswar: The state government is ready to constitute a House Committee to inspect the works of the Shree Jagannath Temple Heritage Corridor project in Puri, stated Parliamentary Affairs Minister Bikram Keshari Arukha in the Odisha Assembly on Tuesday.

The statement came after the opposition BJP and Congress targeted the state government raising the issue of safety of the Srimandir due to peripheral development work around the temple and demanded the constitution of an apex committee to inspect the work.

Arukha said that the apprehensions of the oppositions parties on the threat to the structural integrity of the temple over the digging of holes on its periphery are baseless. The Minister also assured that the peripheral development work around the 12th Century shrine will not cause any damage to the temple’s structure.

“Despite repeated complaints, the district administration has turned a mute spectator to the issue,” Sarangi said. He said, “No one is opposing the developmental work. But the state government will be held accountable if the temple’s structural integrity is threatened”.

Sadangi further urged the Speaker to form a panel that would inspect the works of the heritage corridor project.

Congress legislature party leader Narasingha Mishra demanded that the Speaker should give ruling on the formation of a house committee or a statement from the minister concerned.

Mishra said that allegations have surfaced that the work is being conducted without the approval Archeological Survey of India. And, if the allegation turns out to be true, it would be a matter of serious concern for the security of the temple.