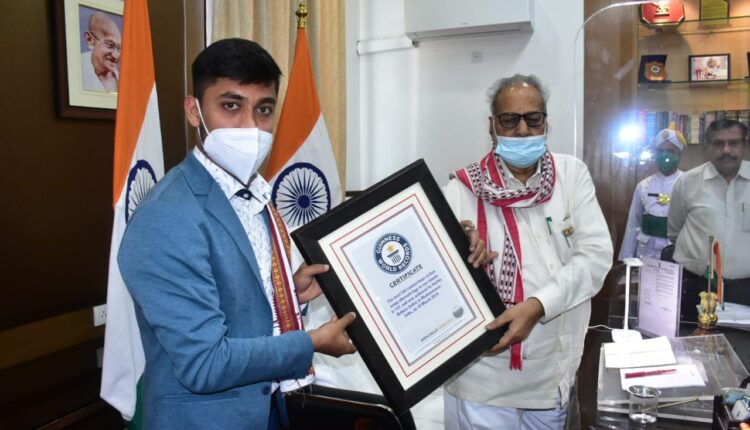 Bhubaneswar: Sachin Behera, a well-known Indian knee striker, tied with a five-kilogram ankle weight and hit with knee at the chest level for three minutes, breaking the previous record of 178 in the name of former Pakistan boxer Mohammad Rashid and striking out 204 knees. Acknowledgments and congratulations were sent to Sachin from all over the state while Odisha Governor Prof Ganeshi Lal met Sachin and congratulated him on his achievements.

He met Sachin at Governor House official residence , lauded him for bringing glory to Odisha in the field of sports and advised him to continue, and encouraged him to become a world record holder. In his response to the governor’s remarks, Sachin said he would bring more success to Odisha. 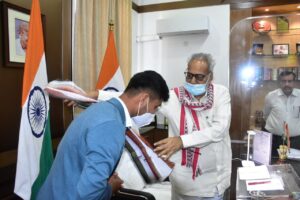 Sachin Behera, son of Laxmiprasad Behera and Aarti Behera, of Larka village in Boden block of Nuapada district, had been involved in sports since he was a child. For this, her parents have been encouraging him. So he was working hard to succeed in the game. He was first known as the 100- meter runner. Not only that, he wanted to bring glory to Odisha and the country by setting a world record in knee injury. That’s why he worked 10 hours a day and worked tirelessly for six long months to get his name in the Guinness Book of World Records.

Sachin is currently interning at Hi-Tech Medical College and Hospital in physiotherapy in Bhubaneswar. Today, his dream has come true, and Sachin has praised his coaches, including his parents, for his success.