Bhubaneswar: In the Union Budget 2022-23, Odisha has received a whopping grant of Rs 9,734 crore for infrastructure and safety projects, which is 76 percent more than compared to 2021-22.

The Khordha-Bolangir and Angul-Sukinda railways are the most important in the allocation of funds to the East Coast Railway. Besides, the grant also includes construction expenses for a new platform at Bhubaneswar railway station and a foot overbridge connecting all the platforms.

According to the Pink Book of the Union Ministry of Railways for the financial year 2022-23, the budget has been earmarked for the construction of nine new railway lines and the doubling of 21 railway lines under the East Coast Railway. The budget earmarks Rs. 891 crore for the Khordha Road-Bolangir (289 km) railway line, which remains unfinished for more than three decades, and Rs 475 crore for Angul-Sukinda (98.7km) road.

Following are the other projects with budgetary grants:-

In the current budget, a total of Rs 1,806.10 crore has been earmarked for the new railway lines under the East Coast Railway.

Similarly, a total of Rs 3,643.36 crore has been earmarked for the East Coast Railway for the doubling of 21 railways.

In addition to this, the budget earmarks fund allocation for construction of flyovers near the railway crossing at Cuttack-Barang Road, Raghunathpur-Gorakhnath road, and Kendrapara -Cuttack road. 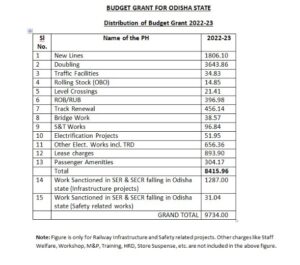 The Centre has sanctioned Rs 3,643 crore for doubling works and around Rs 397 crore for construction of foot over bridges/road under bridges. Odisha received Rs 304.17 crore this year for passenger amenities against last year’s Rs 429 crore.

Fire In US Southern State Forces Thousands To Evacuate