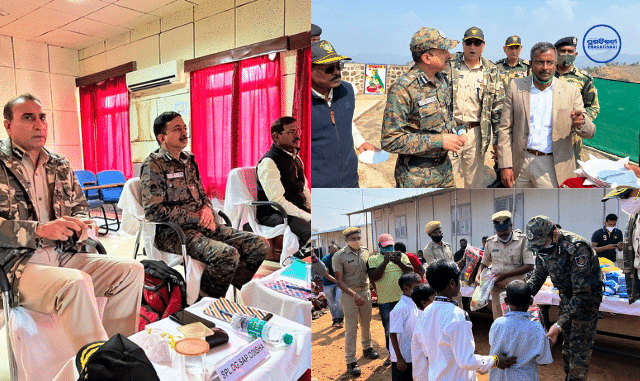 Malkangiri: Odisha DGP Sunil Bansal on Friday reviewed the law & order situation and security preparedness in the Maoist-hit districts of the state ahead of the Panchayat polls. For the first time since taking over as the state’s Director General of Police, Mr. Bansal today visited the Malkangiri’s Swabhiman Anchal, which was once considered a cut-off area and a stronghold of left-wing extremists till the unveiling of Gurupriya Setu.

With the rural elections set to take place in the next few days, a review meeting was held at the Malkangiri SP’s office on the law and order situation, security arrangements for polls, and strategies to counter Left Wing Extremism (LWE) activities in the district.

Due to violent activities by Maoists, elections to the PRIs could not be held in the Swabhiman Anchal of the district for the past 10 years. The district’s DVF, SOG, and BSF operations are being intensified and if necessary, Helicopters will be deployed in the region as additional security measures, it was learned.

“The development work in the Swabhiman Anchal is in full swing. The locals seem to be very happy and there is a lot of excitement among them for the elections,” the DGP said. Further, he called upon the Maoists to shun violence and join the mainstream by availing of the rehabilitation policies of the state government.

Prior to the review meeting at Malkangiri, the Odisha DGP accompanied by Malkangiri SP and BSF officials visited Hantalguda Camp of BSF, Odisha in Swabhiman Anchal’s Chitrakonda where he interacted with the villagers and discussed various developmental issues.

Earlier today, DGP Sunil Bansal landed in a chopper at HAL Helipad in Sunabeda of Koraput. The DGP along with Spl DG SAP, Director Intelligence, IG Ops, DIG SIW & IG BSF held a review meeting in the district headquarters with senior officers from Koraput, Rayagada, Nabarangpur, and DIG SWR. The senior police official reviewed the preparedness for the upcoming elections to PRIs and strategies to counter LWE activities in the affected districts to ensure smooth conduct of the poll process.