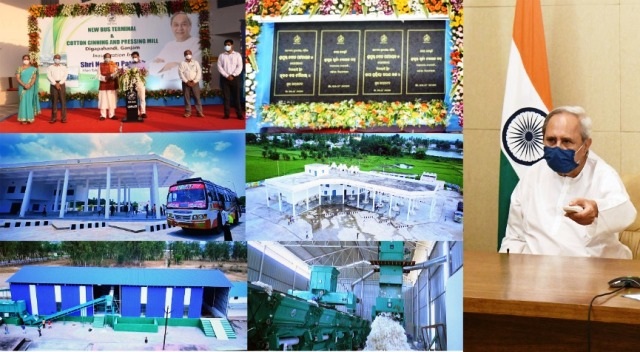 Speaking on the occasion, Patnaik said that emphasis is being laid on the development of smaller cities. He said: “We are working to improve the livelihoods of the people in small towns and the development of various civic facilities. We are focusing on roads, drainage facilities, and drinking water facilities. All families in Digapahandi are connected to piped water. The bus terminal was also inaugurated today.” He hoped that all these benefits would improve the quality of life of the people of Digapahandi.

“The cotton milling mill is a new initiative in the state’s co-operatives sector,” the Chief Minister said and added that it will also inspire other farmers for crop diversification.

“Today is a new era in the development of sports in the state. The Indian hockey team recently won a medal in the Olympics after 40 long years. Two of our players from Odisha were also on this team. “It’s a matter of pride and glory for all of us,” Naveen said.

The Chief Minister said “I have a lot of confidence in our youth. I am confident that only the young generation will achieve excellence in all fields in the coming days and bring fame to our Odisha, and to the whole country.”

Speaking on the occasion, Speaker of Odisha Legislative Assembly, Surya Narayan Patra said that the two projects would play an important role in the overall development of Digapahandi. He highlighted the development programs being undertaken by the state government in Digapahandi and Ganjam.

The bus terminal will also be able to handle about 100 to 150 buses a day, benefiting thousands of people.