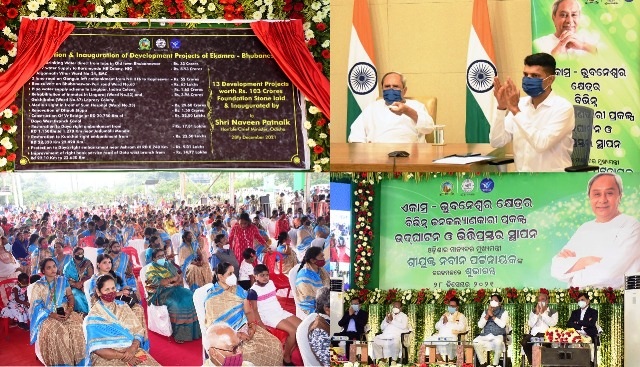 Bhubaneswar: Chief Minister Naveen Patnaik today inaugurated 13 new projects in Ekamra area of ​​Bhubaneswar with an investment of Rs 103 crore. Many important projects have been launched in Old Bhubaneswar for the development of the Ekamra region, including a 24-hour quality drinking water supply, the restoration and beautification of the Dhauli Peace Pagoda, and the purification of the Kedargouri pond.

Addressing the people, the Chief Minister said that the Ekamra scheme has been launched with the help of the people to beautify the areas surrounding the Lord Lingaraj Temple. After completion of the projects, the glory of Bhubaneswar will be further enhanced. Citing the example of a 24-hour drink form tap programme in Puri, the Chief Minister said that the people of Puri are now getting clean water. Now the people of Old Bhubaneswar will also get this facility.

The Chief Minister also highlighted the state’s flagship health scheme, Biju Swasthya Kalyan Yojana, saying that development and welfare are the main identities of the government. He said that the smart health card distribution to the people in Odisha is a revolution in the health care sector.

The function was attended by Works Minister Prafulla Mallick, Housing and Urban Development Minister Pratap Jena, Irrigation and Information and Public Relations Minister Raghunandan Das and Science and Technology Minister Ashok Panda among others. “All the steps that have been taken and planned for the development of Odisha have received international recognition,” they said.

The new projects launched today include a 24-hour drinking water supply (Drink from tap) in the Ekamra area, a 24-hour drinking water supply in the Baramunda Housing Board Colony and Jagannath Vihar area, a two-lane road along Gangaua Left Embankement in Kapileshwar, a box culvert for drainage of waste water from Kedargouri Temple, piped water supply in Indira Colony in Lingipur, Rehabilitation of leprosy colony residents of Lingaraj and Gokhibaba areas, lighting of the entire SUM Hospital road, renovation of the Dhauli Shanti Stupa, construction of a bridge over the Daya West branch Canal, construction of a road over Daya South canal, restoration of Kuakhai right embankment, and improvement of right bank service road of Daya West Canal.

The function was attended by Mr. Sanjay Singh, BMC Commissioner, Khordha District Collector and other officials.

Another 185 COVID-19 patients recover in Odisha