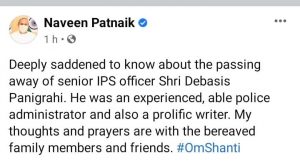 An Indian Administrative Service (IAS) officer of 1986 batch, Mohapatra had assumed charge as the secretary of the Department for Promotion of Industry and Internal Trade (DPIIT) in August 2019.

Secretary in the Department of Industry and Internal Trade (DPIIT) Guruprasad Mohapatra died of COVID-19 related complications on Saturday.

Mohapatra was admitted to AIIMS in mid-April.

Prior to taking over as DPIIT secretary in August 2019, Mohapatra served as chairman of the Airports Authority of India (AAI).

He was a Gujarat cadre 1986 batch IAS officer. He had earlier served as joint secretary in the Department of Commerce.

At the state level, he held the portfolio of Municipal Commissioner in Surat, Gujarat.

Drones to deliver COVID-19 vaccines; Thanks to Cuttack ITI Students