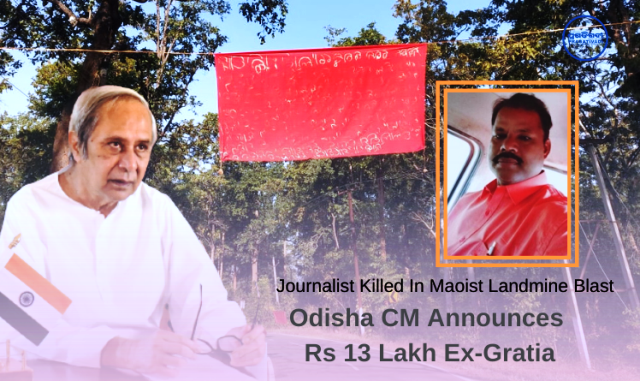 Bhubaneswar: Chief Minister Naveen Patnaik has announced an ex-gratia of Rs 13 lakhs for the family of journalist Rohit Biswal who died in an IED blast allegedly planted by Maoists at Madanpur Rampur block in Odisha’s Kalahandi district on Saturday.

Media Advisor to the State government, Manas Mangaraj today informed that the Odisha Police will provide Rs 9 lakh and the Journalist Welfare Fund will give the remaining Rs 4 lakh as compensation to the deceased journalist Mr Rohit Biswa’s family.

Today, Rohit Biswal, who was working for a vernacular daily Dharitri, had gone to collect a report on resurgence of posters put up by Maoists at different places in the area urging the people to boycott the ensuing Panchayat elections.

As per reports, Biswal went too close to one of the posters put up near Karlakhunta bridge, when a pressure landmine, suspected to be planted by the Red Rebels to ambush police personnel, went off killing the scribe on the spot.

Kalahandi SP Saravana Vivek M informed that police officers along with the bomb detection and disposal squad are on the spot to screen the area for any other explosives devices planted by the insurgents.

Police suspect the LWE cadres of Kandhamal-Kalahandi-Boudh-Nayagarh (KKBN) division could be likely behind the explosion since the unit is active in the area and have been putting up posters to spread fear among the people and disrupt the rural polls.