Malkangiri: Odisha Chief Secretary Suresh Chandra Mahapatra, who is on a two-day field visit to Malkangiri, today reached the ‘Swabhiman Anchal’ of the district to review the progress of various development works being carried out in the region.

The Chief Secretary has thanked the people of Swabhiman Anchal for their immense cooperation in the overall development of the region. This is Mahapatra’s maiden visit to the remote region after the unveiling of the Gurupriya Bridge.

During the visit, the Odisha Chief Secretary reviewed the issues of road construction, drinking water, electricity, and recruitment of teachers. He also inspected the mega drinking water project under construction at Badapoda. He also then visited the BSF camp at Hantalguda. 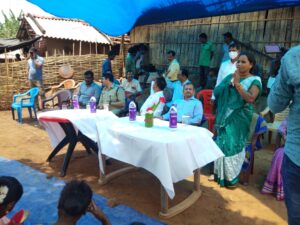 Mahapatra paid a visit to Badapoda school and the Global Portal Hospital. He also interacted with and collected feedback from the locals on the distribution of fishing boats and nets by the district administration.

The Chief Secretary also interacted with the residents of Hantalguda and inquired about the basic problems of the Swabhiman area.

Later, the Chief Secretary inspected the progress of a bridge under construction at Maliguda and the implementation of the state’s housing scheme Biju Pucca Ghar. He directed the officials concerned to ensure that the works are completed within the next two years.