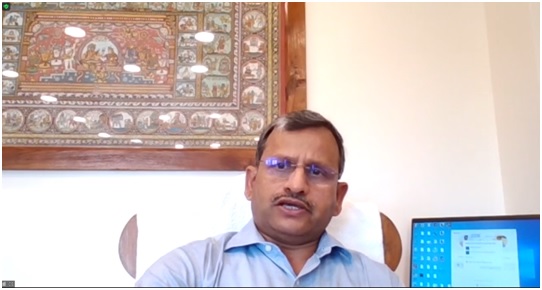 Bhubaneswar: Odisha Chief Secretary Suresh Chandra Mahapatra has emphasised enhancing the production of vegetables and fruits in the State for meeting the internal market demand. He said this while presiding over State Level Sanctioning Committee on Micro Irrigation held in digital mode from Lokseba Bhawan wherein Additional Chief Secretary and Agriculture Production Commission Sanjeev Chopra outlined the issues regarding micro irrigation under PMKSY for discussion.

Reviewing the progress made so far, Mahapatra directed to make a detailed study on the production and requirement of the fruits and vegetables like mango, guava, papaya, lemon, onion and tomato in the State. He asked the department of horticulture to enhance the production of these crops through a definite action plan, and the popularisation of micro irrigation. The department was also asked to work in tandem with the water resources department for intensifying micro-irrigation interventions in ayacut areas of different irrigation projects. Mahapatra said that popularisation of sprinklers and drip methods would optimize the use of water. These methods while enhancing the efficiency of the yacht area and sustainability of irrigation sources will also increase the productivity of the land.

Special Secretary Agriculture and Farmers’ Empowerment Sanjeeb Chadha appraised that following earlier instructions of the Chief Secretary, a cluster approach was adopted for the promotion of banana, guava and papaya in the districts like Barhargh, Sambalpur, Sundargarh, Bolangir, Kalahandi, Rayagada, Gajapati, Angul, Dhenkanal, Deogarh, Boudh, Jajpur and Nayagarh. A total of around 1015 hectares in these districts were brought under such fruit crops in the year 2021-22.  Target was fixed to promote these crops over more 1260 hectares during the current year.

Available data showed, that during the year 2021-22 around Rs.62 cr were invested for prompting sprinkler and drip methods of irrigation with the outcome of 31,038 hectors of medium and high land being brought under irrigation.  Sprinkler irrigation was found more popular among the farmers.

Chief Secretary gave nod to the Action plan of around Rs. 531 cr for the year 2022-23. This fund would be invested for the promotion of vegetables, pulses, oilseeds, coconut and plantation of fruit species over one lakh hector high and medium land with micro irrigation sprinkler, drip HDPE pipe and pump sets methods of irrigation. It may be pertinent here to mention that PMKSY is being implemented in the State with funding support from both the Central and State governments. Substantial subsidy on the cost of these micro irrigation implements is available to farmers on these micro irrigation implements. The subsidy varies from 80 to 60 per cent depending on the social category of the farmers viz. ST and S, small and marginal, and general.

Explosion Of Child Deaths Imminent In Horn Of Africa If World Does Not Act Immediately: UNICEF