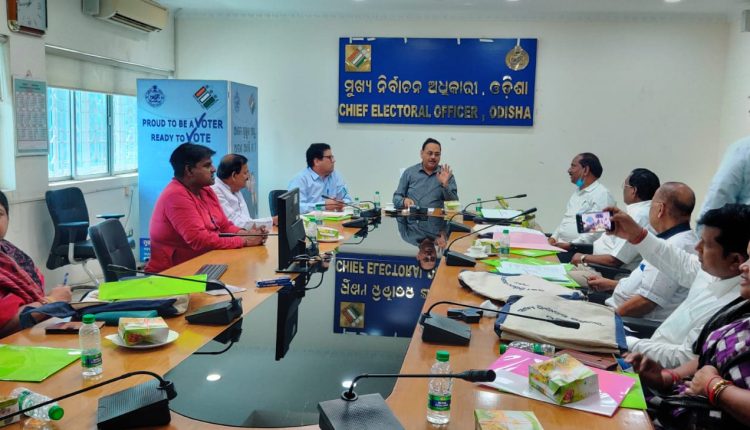 Odisha CEO Convenes All Party Meeting Ahead Of Padampur Bypoll

Bhubaneswar: An all-party meeting has been held under the chairmanship of the Chief Electoral Officer, Odisha today for the bypoll in Padampur assembly constituency. The Chief Electoral Officer Sushil Kumar Lohani (IAS) gave details regarding the bypoll to the political party workers present in the all-party meeting held with all the recognized political parties.

This time, like the previous General Election 2019, the Election Commission has fixed the time for casting of the votes from 7 am to 4 pm for the Padampur by-election. In the Padampur Assembly Constituency, as of 01/01/2020, there are 2,57,474 voters, of which 12,9497 are male and 12,7965 are female voters, and 12 are transgender voters. Similarly, there are a total of 2,233 Dibyang voters, while there are 4,393 voters above the age of 80 and 199 service voters. Chief Electoral Officer Lohani said that voting will be conducted in 279 booths in Padampur constituency and a maximum of 1500 voters can vote in a booth.

Since the announcement of the election date, the model code of conduct has been in force in Padampur Assembly Constituency and the entire Bargarh district. It has been mentioned in the instructions issued by the Election Commission to be followed by all the workers of the political parties and the candidates in the election office, and in case of even the slightest violation, strict action will be taken against the violators as per the Representation of the People Act, the Chief Electoral Officer said.

The Chief Electoral Officer has stated that an MLA candidate can spend a maximum of Rs 40 lakh in the election. The candidates shall keep an account of all expenses in a separate register to account for the expenses incurred for campaigning and submit the same to the District Election Officer within 30 days of the declaration of results.

It has been decided that 50 per cent of booths will be webcast and 35 micro-observers will be appointed in the polling booths in order to conduct the polls in a peaceful manner. Adequate security arrangements have been made to conduct the Padampur bypoll in a transparent, free and fair manner. Five companies of Central Armed Police Force (CAPF) have been appointed by the Ministry of Home Affairs to maintain law and order during the by-election. In addition, adequate number of state police forces have also been deployed, the chief election officer said.

Chief Electoral Officer Mr Lohani has declared that polling day ie December 5th will be a public holiday and polling day and counting day as ‘dry day’. Lohani sought the cooperation of all the political party workers present to conduct the polls in a smooth and peaceful manner.