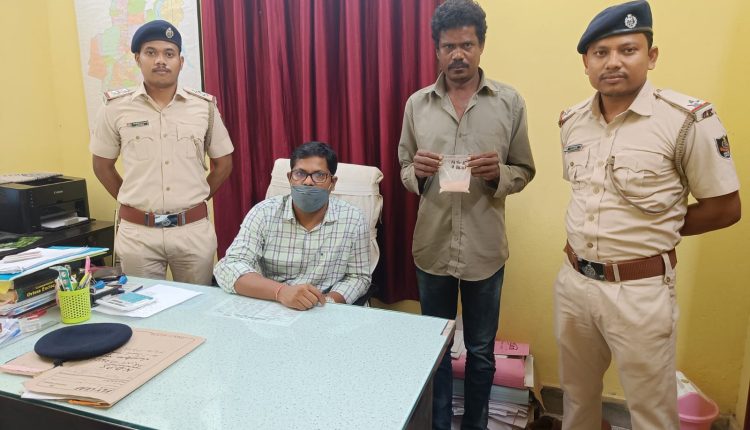 Bhubaneswar: The Excise Squad on Monday apprehended a notorious brown sugar smuggler who was running the illegal trade in and around the capital right under the nose of Commissionerate Police.

The arrested drug smuggler, identified as Chhabi Jena (45) of Kapileshwar in Sundarpada within Airfield police station limits. Around 32 grams of brown sugar, estimated to be worth more than Rs 3.5 lakhs has been seized from his house, the police said.

According to police, accused Chhabi Jena used to smuggle brown sugar from the Jaleswar area in Balasore district and distribute the drugs at various places within the Capital, Airfield, Lingaraj, Khandagiri and Tamando police stations limits.

Sources said the accused Chhabi had gained notoriety for running the illicit trade in and around Bhubaneswar by peddling brown sugar through two of his aides.

The notorious gang managed to evade arrest for a long but their luck ran out this morning when the Excise squad along with Airfield police station counterparts conducted a surprise raid at the house of Chhabi and finally managed to nab him.

Upon search, the cops recovered 32 grams of brown sugar from Chhabi’s house. Later during interrogation, Chhabi revealed the whereabouts of one of his aides. But police failed to arrest him as he had fled before the cops reached.