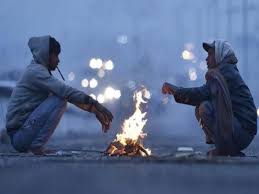 Northwest India likely to get relief from cold wave conditions

New Delhi: The IMD predicted a gradual rise in minimum and maximum temperatures over plains of Northwest and adjoining Central India including Delhi in 48 hours.

The Met agency, however, said that the current spell of cold wave conditions over Northwest and adjoining Central India is likely to abate from December 21.

The IMD said the present cold wave/severe cold wave conditions are likely to continue over Bihar, Gangetic West Bengal and interior Odisha during next two days.

According to the Central Pollution Control Board’s data, Moradabad has recorded and AQI (Air Quality Index) of over 320 for the past two days. Meanwhile, Lucknow is also witnessing dense fog while the temperature here continues to decrease.

According to the Uttar Pradesh Meteorological Department people are unlikely to get relief from the chilling cold for at least next 10 days.