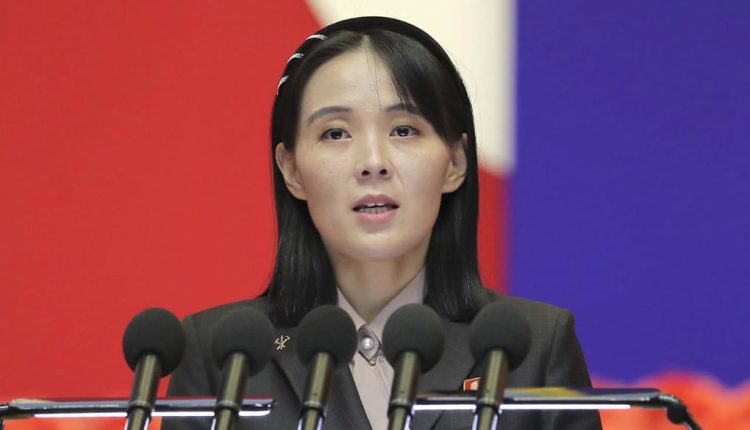 Pyongyang: The powerful sister of North Korean leader Kim Jong-un has angrily rejected South Korea’s offer of economic assistance in return for de-nuclearisation as the “height of absurdity” and dismissed the possibility of face-to-face talks.

The statement comes days after the South Korean president, Yoon Suk-yeol, put forward an “audacious” aid plan that would include food, energy and infrastructure help in return for the North abandoning its nuclear weapons programme.

In a commentary published in Friday’s edition of North Korea’s official Rodong Sinmun newspaper, Kim Yo-jong said her country had no intention of giving up its weapons in return for economic aid. “No one barters its destiny for corn cake,” she said, according to the official KCNA news agency.

She questioned the sincerity of South Korea’s calls for improved bilateral relations while it continues its combined military exercises with the United States and fails to stop civilian activists from flying anti-Pyongyang propaganda leaflets and other dirty wastes across their border.

Yoon during a nationally televised speech on Monday proposed an audacious economic assistance package to North Korea if it takes steps to abandon its nuclear weapons and ballistic missiles program. The offers of large-scale aid in food and health care and modernizing electricity generation systems and seaports and airports weren’t meaningfully different from previous South Korean proposals rejected by the North, which is speeding the development of an arsenal Kim Jong Un sees as his strongest guarantee of survival.

Kim Yo Jong, one of the most powerful officials in her brother’s government who oversees inter-Korean affairs, said Yoon displayed the height of absurdity with his offer, saying it was realistic as creating mulberry fields in the dark blue ocean.

“Playing Hockey For India Has Given Me Everything And More That I Could Think Of”: Salima Tete