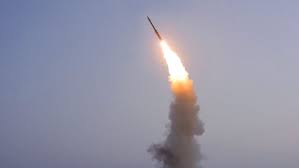 Pyongyang: North Korea fired what may have been a ballistic missile on Tuesday morning, Japan and South Korea said, less than a week after Pyongyang tested what it said was a hypersonic missile.

“Our military detected a suspected ballistic missile fired by North Korea from land towards the East Sea at around 7.27am (22:27 GMT on Monday) today,” Seoul’s Joint Chiefs of Staff said in a statement.

The launch was also reported by Japan’s coast guard, which said the North had fired a “ballistic missile-like object”.

North Korea’s state media said last Thursday that it had launched a hypersonic missile, adding that the weapon had successfully hit a target. The launch had been detected by Japan and South Korea the day before.