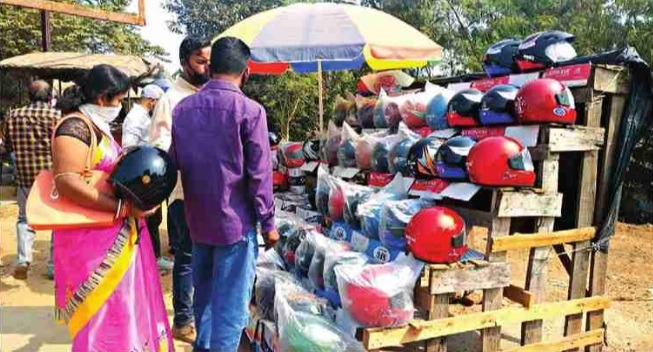 Non-ISI helmet sale becomes rampant at roadside stalls; but not for long

Most of the road accidents involve two-wheelers, and more than 50% of the fatalities are due to the rider not wearing a helmet.

The branded helmet stores report at least three-fold increase in the sales, while the roadside vends are also making a brisk business since the enforcement drive began in the city.

However, motorists and commuters were spotted halting at roadside helmet selling spots in order to purchase one for themselves. Though the helmets sold at considerably lower prices will save one from being fined if left un-noticed, the same can be fatal for one’s life.

Reportedly, the piled-up helmets are not only from unknown brands but also lack the very essential ISI mark on them. Besides, the FAKE protective gears are being sold at a price range of Rs 250-350 and first copies at Rs 800-900, while an ISI marked helmet will cost above Rs 1000.

As per section 194 D of the Motor Vehicles Act, whoever drives a motorcycle or causes or allows a motorcycle to be driven in contravention of the provision of section 129 or the rules or a regulation made thereunder shall be punishable with a fine of Rs 1000 and he shall be disqualified for holding a license for a period of three months.

Hence, commuters are resorting to these steps to avoid penalties.

Besides, the hub of the fake helmets that are being sold in the major cities like that of Cuttack and Bhubaneswar has been traced to Delhi and Kolkata.

Meanwhile, the Ministry of Road Transport & Highways (MoRTH) had earlier passed a notification stating that all two-wheeler helmets must be Bureau of Indian Standards (BIS) certified and should carry the Indian standard (ISI) mark from June 1, 2021.

According to the notification, the two-wheelers helmets bearing the BIS and ISI certification will be allowed to be sold in the country. The reason for this step is to minimise and eventually eradicate the sale of low-quality two-wheeler helmets and improve their safety.

According to the notification dated November 26, 2020 – two-wheeler helmets ‘shall bear the Indian Standard Mark under a license from the Bureau of Indian Standards as per the Scheme-I of Schedule-II of BIS (Conformity Assessment) Regulations, 2018 and this shall come into effect from June 1, 2021.’

Police including SDPO attacked during raid on gambling den