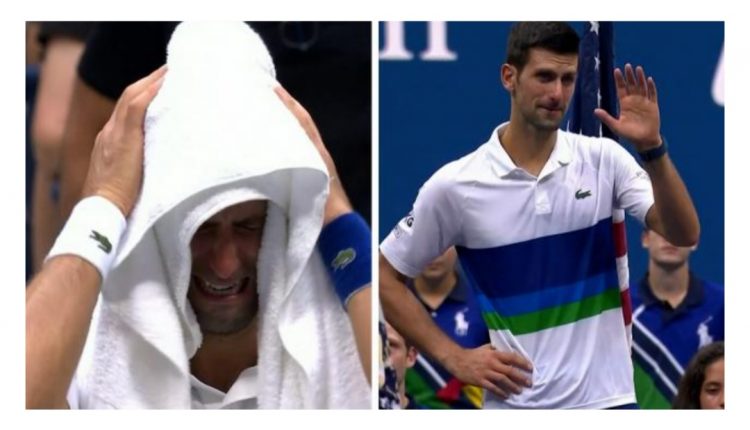 “Never plead for love, demand it.”

Clark Gable is reported to have replied when asked for tips on romance.

If you have to beseech for love, what you end up receiving is termed sympathy. This is not quite astrophysics. Besides, the name is not Novice, but Novak Djokovic. The Serb who survived NATO bombings on Belgrade in his childhood is not some spring chicken, but a man of the world. He might claim to be “the happiest man alive” under the burden of gratitude towards the audience at the Flushing Meadows that finally cheered for him, but he well understands their consistently hostile, boorish and partisan nature. Is Nole not aware that these crowds are completely sold out? “All that was needed for them to love him back was for him to lose…”. If this trade-off was not wishful thinking on part of Roger or Rafa fan boys, masquerading as scribes, such comments would be considered utterly ridiculous. Roger is still not retired, Rafa is on road to recovery. And why just the duo, Flushing Meadows would rather support anyone but the Serb from the next match itself- be it Brooksby, Tiafoe or Berrettini. Losing a match to buy love is just not an option.

So then what happened during the final this year? Novak’s opponent was Daniil Medvedev, someone else the crowds hate, and with as much fervour. The Russian (perhaps because he is a Russian Slav, and that’s the point!) has resided in their bad books since the 2019 edition itself. For all the cool acts that he puts in to go with his calculated game, Meddy has a temper, and a big mouth. He doesn’t mind telling the officials and the viewers what he thinks about them. Hence the booing and the hooting in the third set! (Later, even Medvedev was gracious enough to laugh that off)

Too much is being made of the New York mob cheering him on. Anyone who follows tennis felt overawed by the hugeness of the occasion. No player after 1969 has been just a match away from accomplishing the Calendar Slam. Even the most haughty, hair-brained of raucous Americans could comprehend that. Sports followers are suck for records, as they provide context to the current action. To witness history being made is to realize your money’s worth. Founts of love for the Serb did not suddenly gush out of the hearts of the Flushing Meadows crowd. This was a one-off phenomenon. The audience wanted the show to go on, and on- they were there to witness a five-setter, and Novak has a habit of rising from the dead!

Novak did later acknowledge that he was moved by the support, but what else was there to say? Djokovic is not just a nice guy, but also a smart professional. His explanation makes perfect strategic and business sense. The relationship between the Numero Uno and tennis audience has not turned course. The stage was too big, not just for the crowds, but for the Champ as well, which resulted in emotional inundation all around.

The pressure of expectations and the ongoing winning spree leading him till the very cusp of the Calendar Slam had become too much even for Djokovic to bear. Not only was he physically tired, but also mentally drained. He could not bring his A- game to the court and saw the final slip past his fingers, one set at a time. During the changeover after the ninth game of the third set, before Medvedev was to serve for the match, Novak became a bundle of nerves and sobbed uncontrollably with his head buried in a towel, with the crowd cheering him on.  This is the precise moment that has been wrongly miscomprehended by sundry analysts and tennis journalists. To reiterate, Novak sobbed because the chance had virtually slipped by then, whereas the crowd cheered for they wanted the match to stretch, and Meddy to lose focus (which he did lose, a bit).

“In his defeat, he demonstrated he was a human of flesh, and blood, and pain”.

“The pantomime villain of tennis showed he was vulnerable, and fallible.”

“Till he was fuelled by hate, he kept winning. Love became too much for him to handle.”

Analysts who have written this trash have called him a robot, have also dubbed him the Iceman, little realizing that one could either be a human (Iceman was a serial killer) or a machine, or both. This is the lobby that always exaggerates the role that acceptability plays in the assessment of a sportsperson. Viewership in stadiums, and on TV is crucial- it makes professional sports possible and viable. Besides, individual sponsorships are also a function of public support. Besides, it is ‘people’ who pay for the salaries of these journalists by means of views or subscriptions. That said, crowds do not crown Champs. A player’s greatness is  not a measure of his popularity. You can play with the crowds, or against them – and win. Novak has, so far, managed quite well, and would do well to not fall into this thankless cat-and-mouse chase.

All said, even Novak is incorrigible. He is not likely to give up his ideals, causes, aggressive manner and friends just to please the populi. Savage racket smashings are not going to stop, although he might try to avoid hitting any line judge or throwing his racket in the stands again. Djokovic has supported Sascha despite the recent accusations of domestic abuse. He stood by his friend Justin Gimelstob, despite the latter being charged with assault. He has backed Tsitsipas on the issue of long toilet breaks, calling the rule itself as vague. This also sends a clear signal that Nole himself intends on availing bathroom breaks and Medical Time-outs. He is not going to risk an injury if it flares up midway during a match, and complete that fixture just for the heck of it. His no-vaccine stand is unlikely to get altered (unless Australia makes it necessary precondition for players to compete in the AO). Neither is Novak going to give up on his pet project, Professional Tennis Players’ Association. And the Serb is definitely not going to stop mouthing his gargantuan ambition of being The Greatest.

Djokovic is a ferocious competitor, a diehard professional, a great champion who is not going to change a thing about his on- and off- court demeanour, certainly not to win over the crowds or for some support against less fancied players. Since it is not his playing style rather his antics, ambition and success (against Fedal) that pit the audiences against him, nothing much’s gonna actually change.

This is not to suggest that Novak does not pine for love like other human beings do- not just of tennis watching audiences, but also his fellow-players’ and other sportspersons’. There is innate desire in him to play people pleaser. Over the years he has tried every trick to be loved and feted – shed his sweat-blood-tears on courts, played like a man possessed, won from seemingly hopeless situations, cracked jokes and impersonated others, voiced smart responses in pressers, always been quite sporting on court and lobbied for and on behalf of other players (not just PTPA). But the kind of support that one of the greatest players deserves has never materialized. As a result, he (and his camp) has complained when booed, and whined when jeered. “When they shouted Roger, I heard Novak….”. He was the most popular athlete in Tokyo Olympic village, getting selfies clicked with all and sundry, but then went on to smash his rackets in deep frenzy, and even ended up hurling one in the stands. That is classic Novak Djokovic- just following his instincts. Crowds do not appreciate such rawness of emotion, and never shall, and Novak is not about to process his rawness for crowds to feast upon.

Disclaimer: The opinions expressed in the article are the personal opinions of the author. The facts and opinions appearing in the article do not reflect the views of Pragativadi and www.pragativadi.com does not assume any responsibility or liability for the same.

Congrats Daniil Medvedev. My comprehensive review of the 2021 US Open

Was BTS Spotted In Zendaya’s “TIME”…