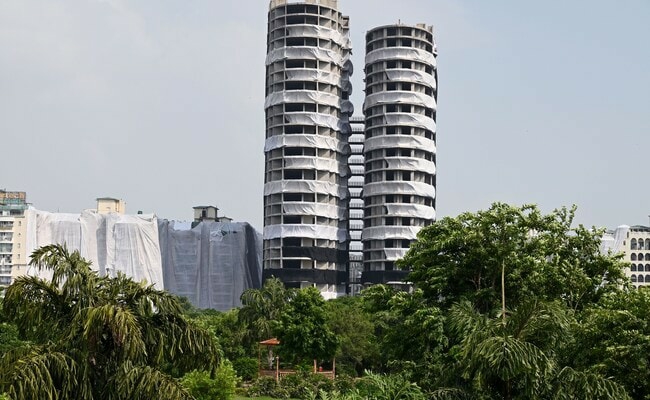 Noida: The Supertech twin towers in Noida are set to be demolished this afternoon by a massive explosion. The area is being evacuated and arrangements have been made to ensure that adjoining structures are not affected by the explosion.

The two towers have been rigged with over 3,700 kg of explosives. Explosives have been inserted into nearly 7,000 holes in the pillars. 20,000 circuits have been set. When triggered, these will crash the pillars in a manner that the towers fall straight down — it’s called the “waterfall technique”.

The collapse will last for nine seconds, according to the project engineer. It will take about 12 minutes for the dust to settle, depending on the wind speed. About 55,000 tonnes of debris will be generated, and it may take as much as three months to clear it. The debris will be dumped at designated areas.

The explosion is expected to trigger vibrations in a 30-metre radius for a few seconds. The magnitude of these vibrations, according to officials, may be about 30 mm per second — similar to an earthquake measuring 0.4 on the Richter scale. Noida’s structures are built to withstand earthquakes measuring up to 6, say officials.

About 7,000 residents of the area have been asked to move out ahead of the demolition. Nearly 2,500 vehicles have been parked outside the area. Following a go-ahead, gas and power supply will be restored in the adjoining buildings by 4 pm, and residents will be allowed back in by 5.30 pm.