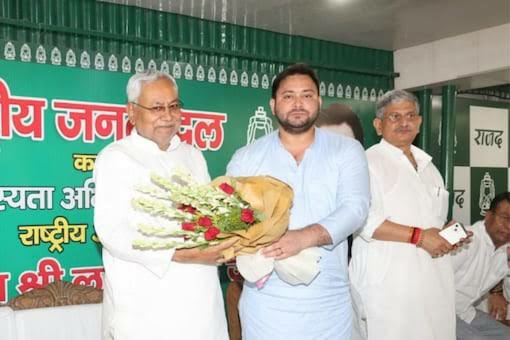 Patna: Nitish Kumar will take oath as Chief Minister of Bihar today at 2 pm, after he ditched the BJP on Tuesday and announced a new “Grand Alliance” which includes Tejashwi Yadav and other Opposition parties.

“Mahagathbandhan (Grand Alliance) of seven parties, one Independent will work closely,” Nitish Kumar said after his second meeting with the Governor yesterday. In the first one, he resigned as Chief Minister of the government which consisted of his party, the Janata Dal United or JDU, and the BJP; less than an hour later, he returned to the Governor, accompanied by Tejashwi Yadav and other Opposition leaders, to state that they should be invited to form the next government based on their combined strength.

Nitish Kumar felt that Amit Shah was attempting a repeat of the Maharashtra model in Bihar and ended the BJP alliance to pre-empt that. Uddhav Thackeray was forced to quit as Chief Minister after Eknath Shinde, a senior leader from his party, the Shiv Sena, instigated a huge revolt in partnership with the BJP. Eknath Shinde was rewarded by the BJP with the post of Maharashtra Chief Minister.

Over 30 injured as pilgrim bus overturns in Balasore