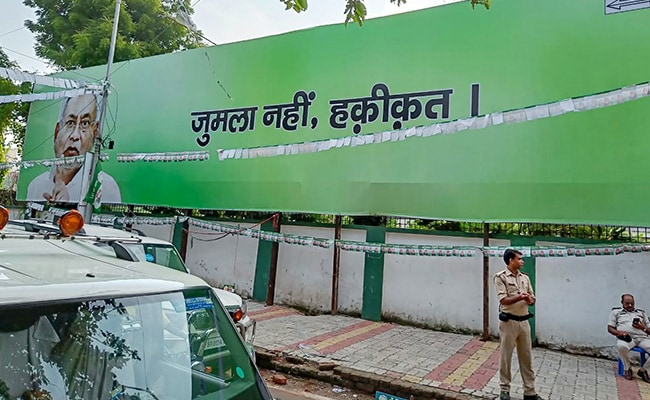 Nitish Kumar Says This On 2024 Ahead Of Delhi Visit

New Delhi: Bihar Chief Minister Nitish Kumar on Saturday said the BJP “will come down to 50 seats” in the 2024 elections “if all Opposition parties fight together”. “I am working for that,” said Mr Kumar, whose likely national role is driving political conversations ever since he dumped the BJP last month to form a new government with old allies, Tejashwi Yadav’s RJD and the Congress. He has so far skirted questions about his ambitions.

His latest call for Opposition unity came in his speech at his party JDU’s executive meeting in Patna, where two resolutions were passed: One authorising Nitish Kumar to work for Opposition unity, and the other saying there’s an “undeclared emergency” in the country under the BJP.

Mr Kumar, speaking to reporters earlier, confirmed he’ll be visiting Delhi to meet with top leaders of other parties for an anti-BJP front. The three-day visit will begin on Monday, news agencies reported.

On five of six JDU MLAs in Manipur having joined the BJP, he said they had visited him in Bihar and were happy over the party ditching the BJP-led NDA. “Just imagine what’s happening. How they are breaking off MLAs who won from other parties,” he said.

Firing On Minister Naba Das: Accused Cop Was Mentally Ill And Under Medication,…