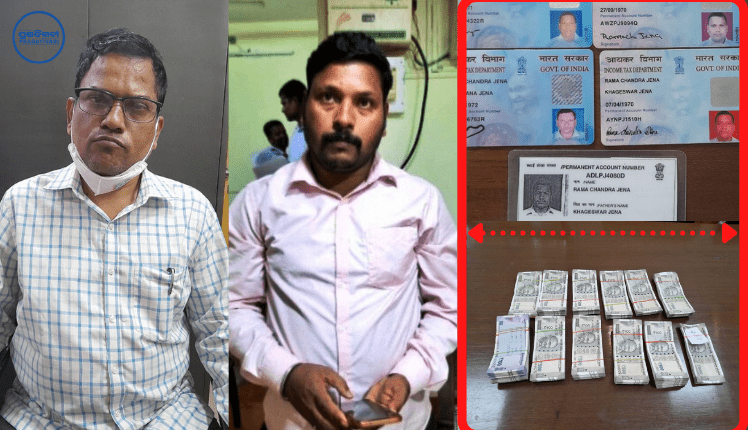 Nimapada: The State Vigilance on Tuesday arrested the Tehsildar of Nimapara, Rama Chandra Jena and his brother Laxman Jena on charges of accumulating assets through corrupt means.

Vigilance sleuths under the Directorate of Vigilance and Anti-Corruption conducted simultaneous raids at the houses and property associated with Nimapara Tehsildar today after recovery of Rs 4,65,000 unaccounted cash from his possession.

Acting on a tip-off from a reliable source, officials of the anti-corruption wing intercepted Rama Chandra Jena, the Tehsildar and in-charge Sub-Registrar, at around 5.00 AM near his official residence in Nimapada.

It may be mentioned here that Jena was under the vigilance scanner for the past few days for his alleged corrupt activities, said sources.

During the search, the Vigilance officials recovered Rs Rs 4,65,000 cash from his possession. However, during inquiry, when Rama Chandra could not give any satisfactory reply and failed to explain the legitimate source of the money, the Vigilance team picked him up.

Reportedly, the raids are being conducted at at the official’s residence at Sector 11, CDA, in Cuttack city and his native Dhanmandal under Garadpur Block in Kendrapara district.

During interrogation, the tainted Tehsildar’s younger brother Laxman Jena, confessed to have deposited a total of Rs 10 lakhs in the bank account, which his brother had given him in the month of September in three phases. He also revealed that Rama Chandra had called him to Nimapara again today to hand over cash.

However, the Vigilance spoiled their efforts and nabbed the govt official red-handed with the unaccounted cash.

During search, Vigilance officers found five PAN cards in the name of Rama Chandra. Except the name, all the PAN cards bear different numbers, date of birth and father’s name.

Another 441 COVID-19 patients recover in Odisha