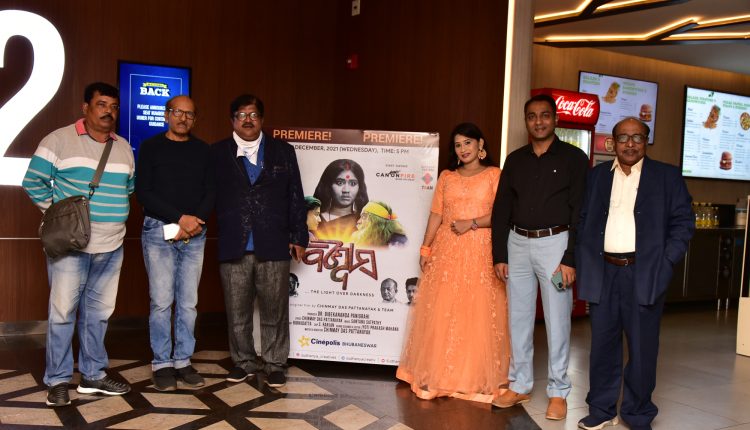 Bhubaneswar: The grand premiere of much awaited new Odia film ‘BISHWASS-The Light over Darkness’ under the banner of Sudhanya Creatives was held today at Cinepolis, Bhubaneswar.

Veteran artists, directors, producers, critics from Ollywood fraternity and eminent personalities of the state attended the premiere show of this full-length feature film and well appreciated the original concept and theme of this new Odia film. Being an epoch making Odia film it has been shot in the many bewitching and attractive places of Odisha; particularly in the natural bounties of Mayurbhanj District.

The eclectic story is based on the supernatural elements of belief & make-belief, hypnotic spells prevalent across religion, culture, traditions, taboos and societies worldwide. Mystic and esoteric orientation of the theme is nonchalant and utterly superstitious driven yet a social drama revolving around make-belief. It drives the central theme with the tone of indigenous places on sorcery and black magic as a social menace.

The film is based on the life of a girl Pallavi; the central character & the protagonist of the social drama played by an amazing new comer, debutante Miss Sahil Mishra (Guddi) & accidentally how she has encountered various situations of superstitions at different stages of her professional life.

The story has been mounded with anecdotal unfolding with suspense, symbolic depictions, surrealism and magic realism where characters have been juxtaposed for a seamless effect. The lyrical song numbers have aided to the magic portrayal of story line and narrative of superstitious belief. It has been a spell binding in a never before style and flair. It has a cathartic deluge in the end for making this film a block booster. The film provokes the big question, as to whether evil drives out goodness, or goodness evil? Can make Belief destroy the belief system of people?

Each song captivates the listeners with its cosmic sound and symphony. It has been proudly appreciated by the audience and film critics during the premiere show. The music, lyrics, songs and singers are incredible in each of the five songs.

Mr. Chinmay Das Pattanayak- the Director has composed the story board, screen play, dialogue and lyrics in harmony and shot them in various enchanting locations of Odisha and in the natural bounties of Mayurbhanj, Puri, and Bhubaneswar; with its lilting toe-tapping songs.

The potential voices of Pandit Shiba Prasad Ratha, Ira Mohanty and Bishnu Mohan Kabi and contribution of the Music Director Santanu Satpathy have been amazing. The creative head Bibhudatta Panigrahi, chief assistant Mr. Sudharanjan Mallick and Mr. Aasish Behera etc. all and each of them have garlanded this film magically.

Producer Dr. Bibekananda Panigrahi, a great litterateur and film lover believes the strong concept and the philosophy of music which act as an emotive key for social change by influencing the psyche.

People and critics expect that the impact of this one of its kind film ‘BISHWAAS-The Light over Darkness’ will be a smashing hit and give new taste to the Odia film lovers. It is scheduled to release in coming January 2022 in all cinemas of the state.