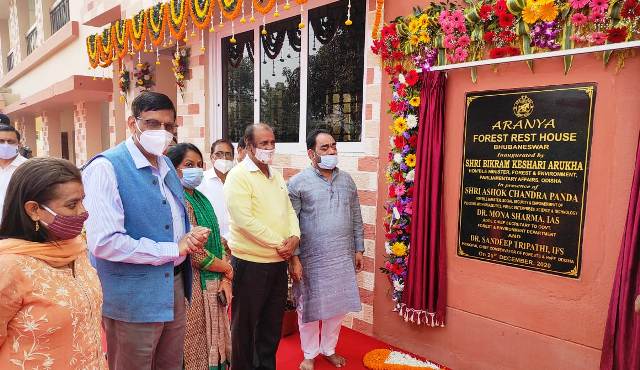 Keeping in view the difficulties faced by the Forest Officers for staying in State Capital while on official tour, Minister Sri Arukha had directed the officials of the Department for construction of new Block in the premises of old FRH in Vivekananda Marg, Bhubaneswar.

Accordingly, the plan and estimate was prepared and submitted to BDA on 28th June, 2015. Since the Plot is situated within a radius of 300 Mtr. from Nabakishore Temple, an Archaeological Survey of India protected monument, No Objection Certificate (NOC) from Archaeological Survey of India (ASI), New Delhi was applied for. The NOC from Ministry of Culture, National Monument Authority was obtained which was communicated to Forest Department vide Letter No. 2484 dated 31.03.2016 of Director, Culture, Odisha.

Bhubaneswar Municipal Corporation approved the plan. IDCO was entrusted with the work and an MoU was signed on 21/02/2017. Foundation Stone was laid by Minister Sri Arukha on 3rd March 2017. IDCO has completed the new Block utilizing 2 Crore 44 thousand rupees. The Rest House has 10 nos of rooms which include 2 nos of VIP suites. The Rest House will fulfil the long-standing requirement of accommodation of Forest Officers on their official visit to Bhubaneswar, the State Capital.