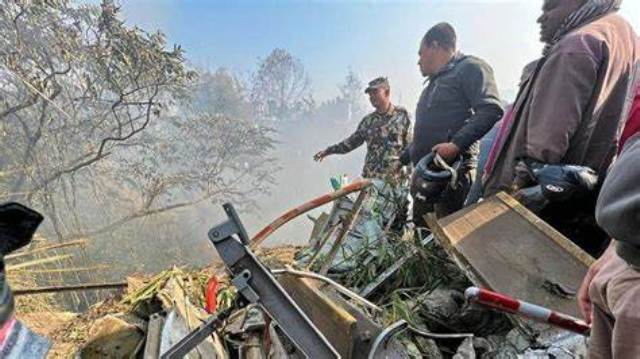 Kathmandu: Nepal health officials have handed over 60 bodies, including that of 5 Indians, to the relatives of the people who died in a plane crash in the country’s resort city of Pokhara, Yeti Airlines said on Tuesday.

Nepalese authorities on Tuesday started handing over to family members the bodies of those killed in the January 14 crash of a Yeti Airlines passenger plane with 72 people on board.

Fifty-three Nepalese passengers and 15 foreign nationals, including 5 Indians, and four crew members were on board the aircraft when it crashed in a river gorge in Pokhara.

Hospital sources said on Monday that the bodies of all five Indians – Abhisekh Kushwaha, 25, Bishal Sharma, 22, Anil Kumar Rajbhar, 27, Sonu Jaiswal, 35, and Sanjaya Jaiswal – had been handed over to their respective family members.

According to a statement issued by Yeti Airlines, postmortem has been performed on 70 bodies at the Forensic Department of Tribhuvan University Teaching Hospital here.

A total of 60 bodies have already been handed over to the family members, including five belonging to the India, it said.

The bodies of four identified persons are yet to be handed over to their families, the statement said, quoting hospital sources.

“The bodies of 6 unidentified persons are in the process of handover,” it said.

The Kaski District Administration Office is actively searching for two missing persons, the statement said. Earlier, the reports said that only one person was missing.

However, the updated statement with two missing bodies was issued after doctors working in the identification process collected two separate body parts, which made them question the earlier statement, said an official at the Rescue Coordination Centre of the Civil Aviation Authority of Nepal (CAAN).

The exact situation cannot be ascertained unless the DNA tests for the bodies are completed, he added.

“Meanwhile, DNA testing is being conducted on human body parts collected from the crash site,” reads the statement issued by the airlines.

According to Nepal’s civil aviation body, 914 people have died in air crashes in the country since the first disaster was recorded in August 1955.

The Yeti Airlines tragedy in Pokhara is the 104th crash in Nepali skies and the third biggest in terms of casualties.