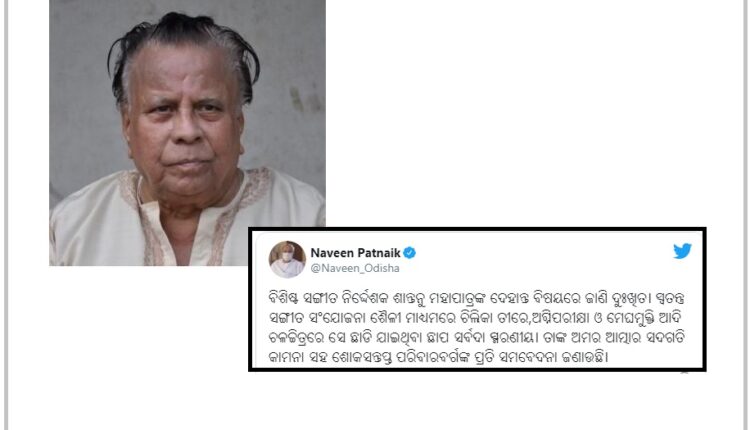 Patnaik also conveyed his sympathy to the bereaved family.

Taking to his Twitter handle, the Odisha CM said that the music director has left his imprint in the memories of every Odia with his work that included materpieces like “Chilika Tire” (Jaa jare bhasi ja), “Agniparikhya” (Mun khoji bule), and “MeghaMukti” (Sei jhilmil).

Mohapatra was born in November, 1936 in Baripada of Mayurbhanj district. By profession, Mohapatra was a geophysicist (an IIT-Kharagpur pass-out) and had worked with Odisha Mining Corporation (OMC).

He was associated with Odia music industry for almost 60 years.

He is the first from Odisha to work with Hindi film greats like Lata Mangeshkar (Surjyamukhi), Mohd Rafi (Arundhati), Manna Dey (Surjyamukhi), Usha Mangeskar (Arundhati) and experimented with other artists like Suresh Wadekar, Anuradha Paudwal, Usha Uthup, Kavita Krishnamurthy and others with his Mumbai style orchestra music and choral songs.

He has around 1,900 plus compositions, including 53 films (feature and tele),10 Jatras and 60 dramas by AIR (Cuttack) and 10 dance dramas to his credit . He has also won the highest number of awards and accolades as a music director in Odisha, totalling over 80.

US criticizes China for putting Wuhan scribe behind bars