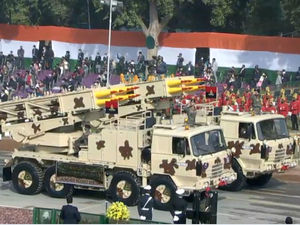 New Delhi: India celebrates its 72nd Republic Day event at Rajpath on Tuesday under the shadow of the dreaded coronavirus  pandemic.

This year, Republic Day celebrations will witness several firsts, including shorter route for the parade, fewer spectators, no chief guest, no motorcycle stunts, no bravery awards, smaller marching contingents, no children below 15 and elderly with comorbidities in the annual parade.

The celebration will conclude after the traditional fly past 11.25 am. Captain Preeti Choudhary leads upgraded Schilka Weapon system.