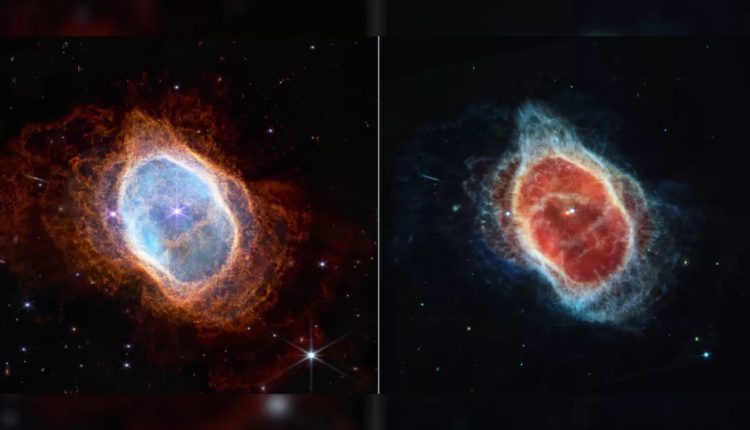 California: A research team recently began digging into Webb’s highly detailed images of the Southern Ring Nebula to reconstruct the scene. It’s possible more than one star interacted with the dimmer of the two central stars, which appears red in this image, before it created this jaw-dropping planetary nebula. The first star that “danced” with the party’s host created a light show, sending out jets of material in opposite directions. Before retiring, it gave the dim star a cloak of dust. Now much smaller, the same dancer might have merged with the dying star – or is now hidden in its glare.

Some of the first data from NASA’s James Webb Space Telescope has shown there were at least two, and possibly three, more unseen stars that crafted the oblong, curvy shapes of the “Southern Ring Nebula”. Plus, for the first time, by pairing Webb’s infrared images with existing data from ESA’s (European Space Agency’s) Gaia observatory, researchers were able to precisely pinpoint the mass of the central star before it created the nebula. A team of almost 70 researchers led by Orsola De Marco of Macquarie University in Sydney, Australia, analyzed Webb’s 10 highly detailed exposures of this dying star to produce these results.

Their calculations show the central star was nearly three times the mass of the Sun before it ejected its layers of gas and dust. After those ejections, it now measures about 60 percent of the mass of the Sun. Knowing the initial mass is a critical piece of evidence that helped the team reconstruct the scene and project how the shapes in this nebula may have been created.

Let’s start with the top-tier celebrity of this particular “party,” the star that sloughed off its layers of gas and dust over thousands of years. It appears red in the image on the left because it is surrounded by an orbiting, dusty disk similar in size to our solar system’s “Kuiper Belt”. While some stars expel their layers as solo acts “on stage,” researchers propose that there were a few companions with front row seats – and at least one that may have joined the central star before it began to create the Southern Ring Nebula. “With Webb, it’s like we were handed a microscope to examine the universe,” De Marco said. “There is so much detail in its images. We approached our analysis much like forensic scientists to rebuild the scene.”

It’s common for small groups of stars, spanning a range of masses, to form together and continue to orbit one another as they age. The team used this principle to step back in time, by thousands of years, to determine what might explain the shapes of the colorful clouds of gas and dust.

First, they focused on the aging star that cast off its layers and is still surrounded by a dusty red “cloak” of dust. Extensive research about these types of aging stars shows that dusty cloaks like these must take the form of dusty disks that orbit the star. A quick dive into the data revealed the disk. “This star is now smaller and hotter, but is surrounded by cool dust,” said Joel Kastner, another team member, from the Rochester Institute of Technology in New York. “We think all that gas and dust we see thrown all over the place must have come from that one star, but it was tossed in very specific directions by the companion stars.”

Before the dying star shed its layers, the team proposes that it interacted with one or even two smaller companion stars. During this intimate “dance,” the interacting stars may have launched two-sided “jets”, which appeared later as roughly paired projections that are now observed at the edges of the nebula. “This is much more hypothetical, but if two companions were interacting with the dying star, they would launch toppling jets that could explain these opposing bumps,” De Marco explained. The dusty cloak around the dying star points to these interactions.

The complex shapes of the Southern Ring Nebula are more evidence of additional unseen companions – its ejections are thinner in some areas and thicker in others. A third closely interacting star may have agitated the jets, skewing the evenly balanced ejections like spin art. In addition, a fourth star with a slightly wider orbit might have also “stirred the pot” of ejections, like a spatula running through batter in the same direction each time, generating the enormous set of rings in the outer reaches of the nebula.

The two images shown here each combine near-infrared and mid-infrared data to isolate different components of the nebula. The image at left highlights the very hot gas that surrounds the central stars. The image at right traces the star’s scattered molecular outflows that have reached farther into the cosmos.

The team’s paper, entitled “The messy death of a multiple star system and the resulting planetary nebula as observed by JWST,” will be published in Nature Astronomy on December 8.