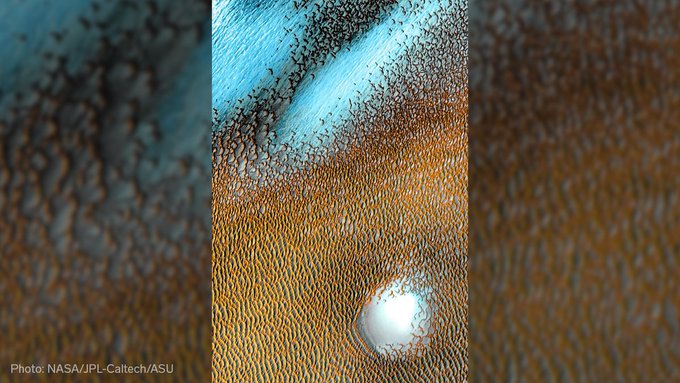 Florida: NASA shared an image of dunes surrounding Mars’ northern polar cap to mark the 20th anniversary of the Mars Odyssey orbiter. The false-color image shows a sea of blue dunes and yellow wind-sculpted lines on the red planet.

The section captured in the shot represents an area that is 19 miles wide, NASA said. The sea of dunes, however, actually covers an area as large as Texas.

The photo is a false-color image, meaning that the colors are representative of temperatures. Blue represents cooler climes, and the shades of yellow mark out “sun-warmed dunes,” the US space agency wrote.

The photo is made of a combination of images captured by the Thermal Emission Imaging System instrument on the Mars Odyssey orbiter, NASA wrote.

Captured during the period from December 2002 to November 2004, the breathtaking images have been released to mark the 20th anniversary of Odyssey.

The Mars Odyssey orbiter is a robotic spacecraft circling Mars that uses a thermal imager to detect evidence of water and ice on the planet. It was launched in 2001, making it the longest-working Mars spacecraft in history.