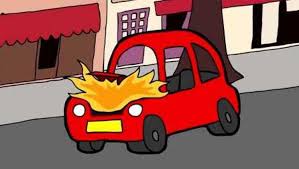 Cuttack: Three persons, including a woman and her son, had a narrow escape when the car they were travelling in caught fire after hitting a stray bull on NH 16 near Sardal in Chowdwar area here today.

Reportedly, the incident took place when Nasima Khatun of Soro area along with her son was en route to SCB Medical College and Hospital here in a car. Meanwhile, the vehicle hit a stray bull near Sardal. Moments later, the car caught fire.

While all the occupants of the car managed to escape unhurt, the ill-fated vehicle was completely damaged.
On being informed, a team of firefighters reached the spot and managed to douse the flames after an intense operation. Following the incident, traffic on the busy highway came to a grinding halt.