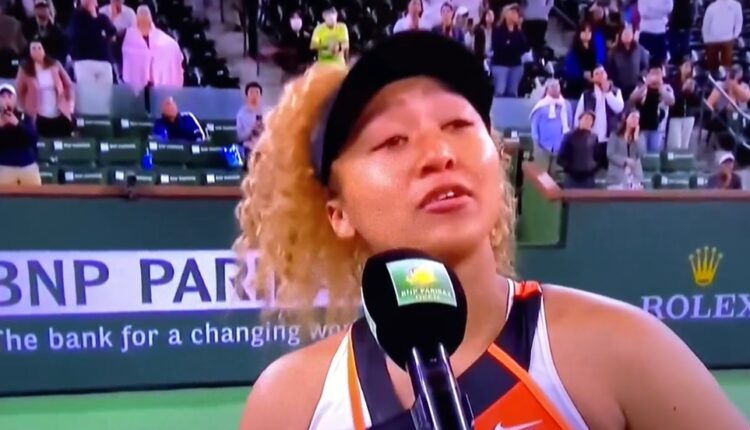 Naomi Osaka was reduced to tears after being heckled during her second-round defeat to Veronika Kudermetova at the BNP Paribas Masters in Indian Wells.

The Japanese player, who missed parts of the 2021 season because of mental health issues, was jeered in the early part of the match and it was undoubtedly a major factor as she lost 6-0 6-4 to the world number 24.

A spectator reportedly shouted “Naomi, you suck”, with Osaka complaining to the umpire. As she went to serve in the third game of the match she was visibly crying.

Clearly affected, she lost the first set without winning a game, before putting up a better fight in the second set.

Osaka made the unconventional decision to stay on court and be interviewed after her loss where she said the incident reminded her of a video she watched of Venus and Serena Williams receiving abuse at the same venue in 2001.

The Williams sisters boycotted the event – widely regarded to be the biggest outside of the four grand slams – for 14 years after being racially abused 21 years ago.

Speaking through tears on court, Osaka said: “I just wanted to say thank you, I feel like I cry enough on camera.

“To be honest, I’ve been heckled before, it doesn’t really bother me, but being heckled here, I watched a video of Venus and Serena getting heckled here, if you’ve never watched it you should watch it and I don’t know why, but it got into my head and it got replayed a lot.”

Osaka was playing her first tournament since the Australian Open in January where she lost in the third round.

The 24-year-old, who has won four grand slam titles, withdrew from the French Open and then missed Wimbledon last year after revealing she was suffering from mental health issues.