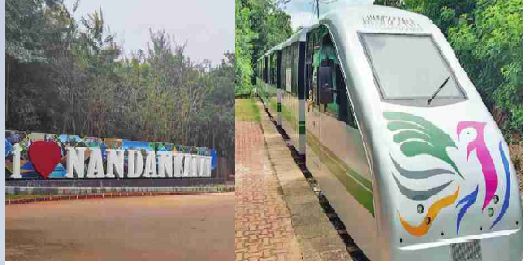 Nandankanan Makes Special Arrangements As It Readies To Reopen

Bhubaneswar: The famous Nandanakanan Zoological Park in Bhubaneswar is set to throw its gates open for visitors from tomorrow (August 3) after remaining closed for months for the public in the outbreak of Covid-19.

Now the visitors can enjoy the four safaris, a Toy train, Boat Vihar and Battery vehicles. The authorities have also introduced a new place for the tiger bear and lion safari.

“Providing the best arrangements to the visitors is the top priority to the authorities of the Nandanakanan Zoological Park,” Mohapatra said.

The Battery operated train required frequent servicing. Following the restoration of the battery train, the authority had given the tender to the Rail India Technical and economical private limited. Moreover, multilevel parking has also been introduced by the authorities at the Zoo premises.

During the inspection, the director was accompanied by the Zoos’ ACF Amulya, Banmali Sahu, Swagatika Sahu, Bindu Prashad Pradhan, Education Officer- Milan Panda have provided the reports to the higher authorities in this regard.

All the guidelines issued by the governments will be strictly followed on the premises of the Zoo. A Thermal screening for the visitors will also be conducted at the entry point. However, the Zoo will remain closed for two days during weekend shutdowns.

Monsoon To Be ‘Normal’ In August & September, Says IMD