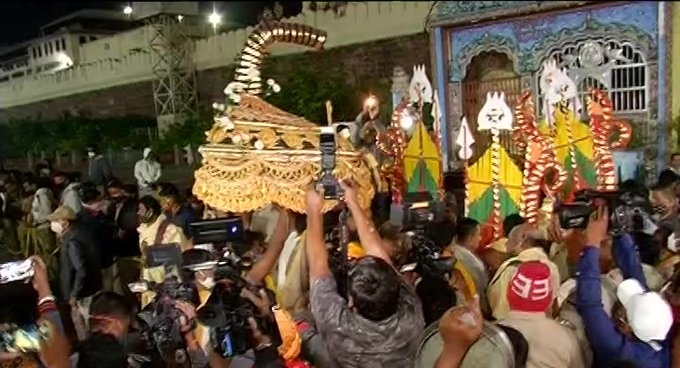 Puri: After 25 years, the much-awaited ritual of the Holy Trinity which falls only in the year marked with six days of Panchuka period (last five days of Kartik month) is being celebrated today. This Besha commemorates the killing of Sahashrarjuna by Parsuram or battle between Aurjua and his son Nagarjuna.

The rare Nagarjuna Besha of Lord Jagannath was delayed by almost 3 hours following some dispute between Bhandar Mekap, Khuntia and Singhari over gold ornaments. Reportedly, controversy also erupted over the engagement of more number of servitors for the rituals. The Besha rituals which were scheduled to kick-off at 4:45 AM began at 7 AM after the intervention of administration.

Ritual timings of Nagarjuna Besha in Puri Srimandir so far:

With the arrival of special Naga attires for the Besha rituals, morning nitis of Holy Trinity were held following which decoration of Bada Thakura Balabhadra & Mahaprabhu Jagannath begins at Puri Srimandir.

The deities are being dressed as Naga warriors with golden weapons including arrows, bows, Hala (plough), Chakra (wheel), Musala (mace), dagger and knife.

The sevayats and artisans engaged in making the ornaments and dresses have been leading an austere life with one meal of ‘Habisa Anna’ a day for the last one month.