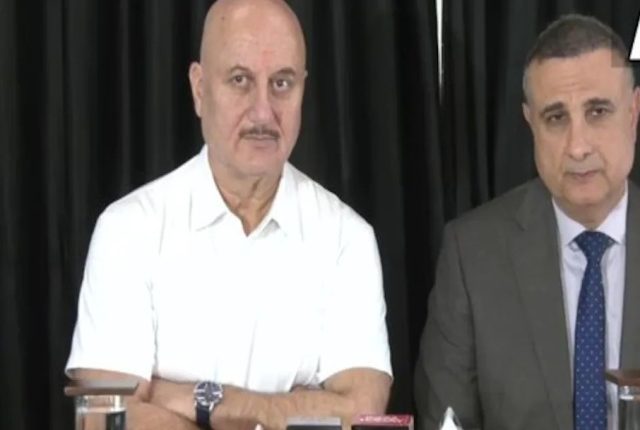 Mumbai: The debate over “The Kashmir Files” will strengthen relations between India and Israel, Israel’s Consul General to Midwest India Kobbi Shoshani said on Tuesday while distancing himself and the state from filmmaker Nadav Lapid’s remarks on the film.

Shoshani, who shared the dais with actor Anupam Kher at a press conference here, said the “The Kashmir Files” is not propaganda but a “strong movie” that gives place to sufferings of the people of Kashmir.

Kher, part of the ensemble cast of “The Kashmir Files”, agreed, saying the controversy over Lapid terming the film “vulgar” and “propaganda” has brought India and Israel closer.

The Israeli director’s comments came at the closing ceremony of the International Film Festival of India (IFFI) in Goa on Monday.

“When somebody opposes certain things, you discover how together the two countries are. The brilliant gesture by the consul general to come here proves that this is a relationship. And it is a relationship of pain because both the countries have suffered exodus and Holocaust, which is the truth,” he said.

According to Shoshani, Kher represents what has happened in Kashmir with the Kashmiri Pandit community.

“The first person I called in the morning was Anupam Kher, my friend, just to apologise. Apologise about a speech that was a private opinion. It (Lapid’s remarks) has nothing to do with the state of Israel, officially and unofficially,” Shoshani told reporters.

Asked if the controversy will impact India-Israel ties, the diplomat said it will further cement the relationship.

“It was a damage, definitely we need to accept it. The ambassador made it very clear this morning and I did as well. It’s good that this raised the question of the people who suffered there in Kashmir. I have come here to give my support to my friends in India. India and Israel are full democracies. Freedom of speech is extremely important in both countries,” said Shoshani.

UK’s ‘Golden Era’ With China Is Over: Rishi Sunak