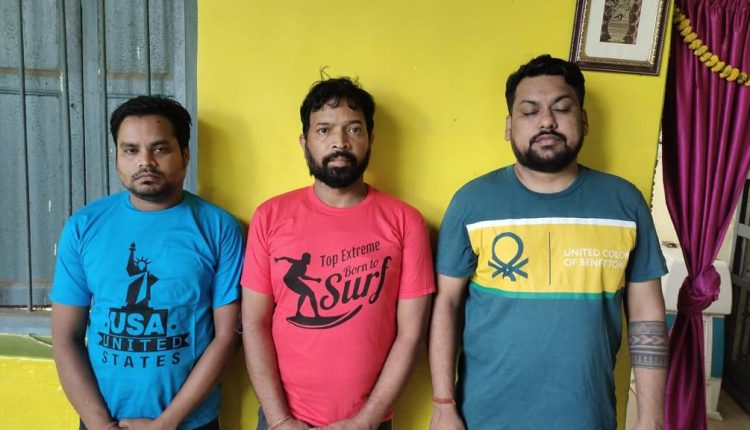 Bhubaneswar: The Commissionerate Police has cracked the mystery behind Manish Anurag’s murder with the arrest of three of his friends.

On October 10, Nabin Das reported that his son Manish Anurag (30) had been kidnapped by some unknown persons for ransom.

On the same day at around 03.00 PM, the dead body of Manish was found floating inside a pond at Namrakani temple of Bhagabanpur village under Tamando PS.

The information was verified and the dead body was identified.

While the exact cause was not known immediately, a preliminary investigation suggested that the deceased was dumped in the pond by some miscreants, according to police.

” During the investigation, it was ascertained that on October 9, deceased Manish Anurag had met his friend Tapas near a shop where he usually visits. At around 05.30 PM he got a phone call from Amrit Biswal in which Amrit insisted the deceased to accompany him and his friends for a bachelor party. Accordingly, one Maruti Suzuki Ciaz car bearing no- OD 02 X 9696 being driven by Amrit reached near Guavaz shop and picked the deceased and went to the Laxmisagar PS Area, said the Police.

” Then they again went to South city bar at Bhagabanpur under Tamando PS. During that time, one Litu slept inside the car. There was a fight between the three for payment towards the bill of food and drinks and the deceased was forced to pay the bill. Hence he called his mother for money and an amount of Rs- 8000/- was transferred to the account of Manish on the same night. Due to the said dispute, there was tussle between Amrit, Muna , Litu with Manish as a result Manish became senseless at the spot near village Bhagabanpur, it added .

Thereafter, the accused persons with an intention to conceal the evidence, threw the dead body inside a pond near Namrakani temple of Bhagabanpur village under Tamando PS and absconded from the spot.

All the accused persons have been arrested today and are being forwarded to the Court, added a senior official.