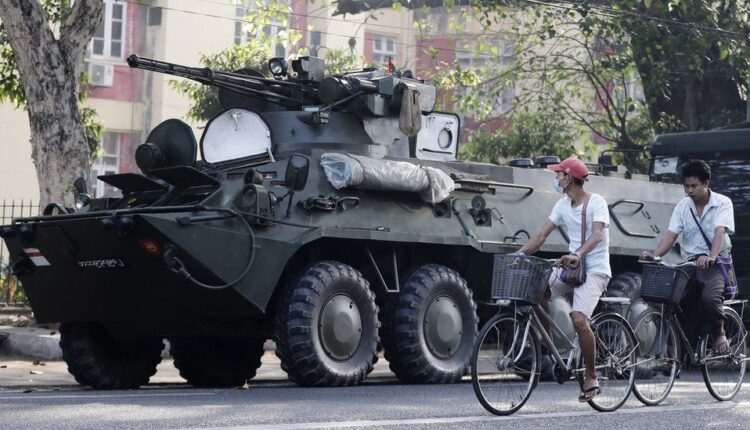 Yangon: Armoured vehicles have appeared on the streets of several cities in Myanmar amid signs the military is preparing a crackdown on opposition to the coup it carried out on 1 February.

With protesters refusing to back down, the generals imposed an internet shutdown on Monday morning and ratcheted up the military’s presence across the country.

Extra troops were seen in key locations of Yangon, the nation’s commercial hub and biggest city, including armoured personnel carriers near the central bank.

Live-stream images shared on social media platforms before the internet blackout showed more military vehicles and soldiers moving through others parts of the country.

However fresh protests again flared in Yangon on Monday morning, including near the central bank.

In the northern state of Kachin, the security forces fired shots at a protest – the ninth day of anti-coup demonstrations across the country.

A UN official accused the military of “declaring war” on the people.

The coup in Myanmar removed the civilian government led by Aung San Suu Kyi. Her party won a resounding victory at the election in November, but the military said the vote was fraudulent.

Ms Suu Kyi is now under house arrest. Hundreds of activists and opposition leaders have also been detained.

Western embassies – from the European Union, the United Kingdom, Canada and 11 other nations – earler released a statement calling on security forces to “refrain from violence against demonstrators and civilians, who are protesting the overthrow of their legitimate government”.