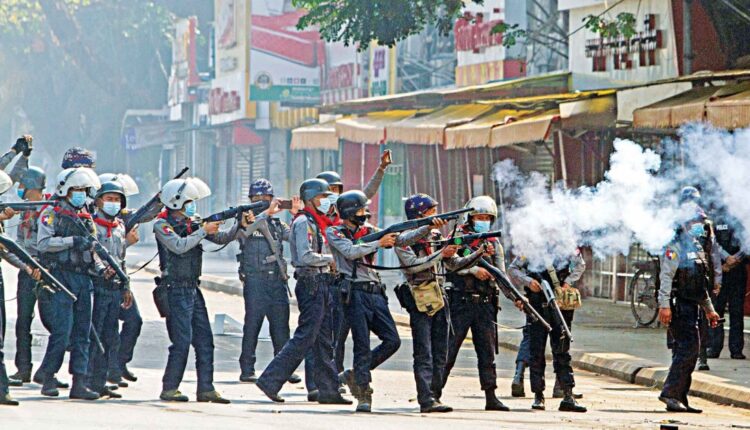 Mandalay: Police have fired on protesters in Myanmar killing at least 18, the UN human rights office says, on the deadliest day of anti-coup rallies.

Deaths were reported in several cities including Yangon, Dawei and Mandalay as police used live rounds and tear gas.

UN chief Antonio Guterres on Sunday led the chorus of international condemnation against the actions of the military, which grabbed power on February 1 and declared a year-long “emergency” after alleging electoral fraud in a November election that was won by civilian leader Aung San Suu Kyi’s party in a landslide.

About 1,000 protesters demanding Aung San Suu Kyi’s government be restored to power are believed to have been detained on Sunday.

“The use of lethal force against peaceful protesters and arbitrary arrests are unacceptable,” Stephane Dujarric, UN spokesman, said in a statement.

“The Secretary-General urges the international community to come together and send a clear signal to the military that it must respect the will of the people of Myanmar as expressed through the election and stop the repression.”

“The military authorities must immediately stop the use of force against civilians and allow the population to express their right to freedom of expression and assembly,” said European Union diplomatic chief Josep Borrell.

US Secretary of State Antony Blinken condemned what he described as “the Burmese security forces’ abhorrent violence against the people of Burma”, using the country’s former name.