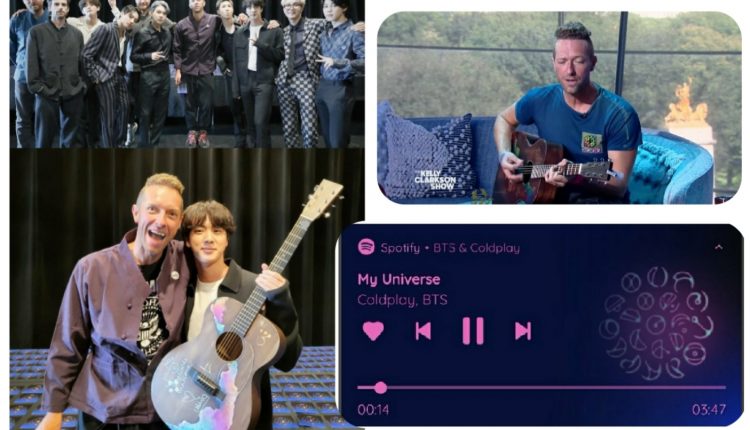 Speaking about the collaboration to Zane Lowe on Apple Music 1, Martin said working with the group had been “a joy”.

“It had been in my mind for a while that someone had said BTS were wondering if we’d do a song for them or something like that. And the phrase, ‘My universe,’ in this text was like, ‘Oh, that’s a cool song title,” Martin added.

“So, occasionally I ask producers we’re working with if they have any spare loops they don’t know what to do with, and that’s often how our pop songs come about. Anyway, Bill, who we work with a lot, this guy called Bill Rahko, I said, ‘Do you ever make tracks?’ And he’d made this loop, this track with a bit of vocals on it. And I said, ‘Oh, please, can I take that away?’ I’m not a great driver, but I was driving around, and then the chorus of ‘My Universe’ just landed.

So, I drove straight back to the studio, I said, ‘Okay, let’s put this down now.’ This is all in the same day. Then I started singing the chorus, and it felt good. So then I called Phil, our fifth member, and Max Martin and said, ‘I think we’ve got a song to give to BTS.’ And they said, ‘Why don’t we hold onto it and give it to BTS.’ And then we started communicating with BTS and then went to Korea.”

After the song’s arrival, Coldplay frontman Chris Martin gave an acoustic performance of the tune on The Kelly Clarkson Show — and even sang two of BTS’ verses in their native Korean.

chris martin sang some of bts’ korean parts, this is wholesome 😭
pic.twitter.com/yjI4ZuhNth

A post shared by The Kelly Clarkson Show (@kellyclarksonshow)

On Friday, Jin shared a photo of himself holding a guitar and posing with the British singer.

His caption, which was in Korean, read: “the guitar Chris Martin gave as a gift after he finished his concert.”

The BTS singer called Chris “my friend who coolly gave it to me when I told him his guitar was awesome.”

He thanked the Coldplay singer and added that he was going to keep the guitar “as a family heirloom.”

“My Universe,” their collaboration song with BTS. Within 8 hours of its release, the song’s lyric video has been viewed over 9 million times on YouTube.

According to Atlantic Records, an “Inside My Universe” documentary will premiere on Sept. 26.

On Thursday, both groups shared photos of their reunion when BTS visited New York.

Early this year, Chris went to South Korea to work on “My Universe” with BTS.