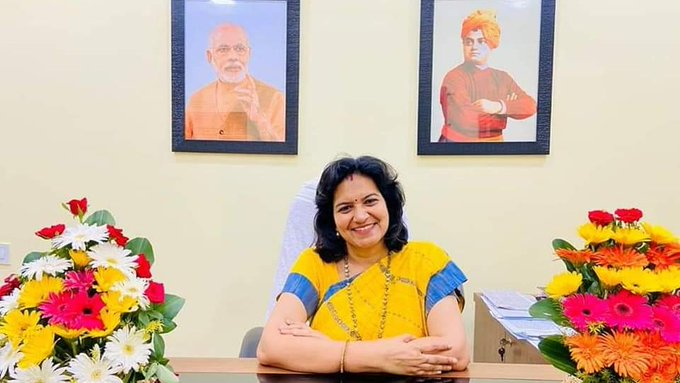 Bhubaneswar: BJP MP from Bhubaneswar, Aparajita Sarangi wrote to Chief Minister Naveen Patnaik requesting him to send a proposal to the Centre for an integrated metro rail system in the twin cities of Bhubaneswar and Cuttack.

Citing the Metro Rail Policy, 2017, she said the cities having more than 20 lakh population should plan for Metro Rail System. “In this regard, I would like to mention that the population of Bhubaneswar is likely to exceed 20 lakh within 4 to 5 years. Further, the combined population of twin cities of Bhubaneswar and Cuttack is already exceeding 20 lakh,” the BJP MP wrote.

“Therefore, in the fitness of things, an integrated Metro Rail system should be planned by the State Government. The project can be implemented in a phased manner, first starting with the city of Bhubaneswar, thereafter expanding to the city of Cuttack,” she added. The IAS-turned-politician stated that metro system can be planned under a 50-50 equity partnership of Central and State Governments as per Metro Policy 2017. The implementation of the project can be done by 50:50 Joint Venture of Central Government and the Government of Odisha.

She requested the CM to look into the matter and directed the concerned officials to send a proposal to MoHUA for sanctioning central financial assistance for feasibility study and Detailed Project Report. “In anticipation of the State Government sending a detailed proposal to GoI, I am writing to Hon’ble Minister, MoHUA, GoI, for positive consideration of the state proposal once it reaches the Ministry,” she said in her letter.

Sai Pallavi Gives A Glimpse Of Her ‘Special Family Trip After Ages’; WATCH