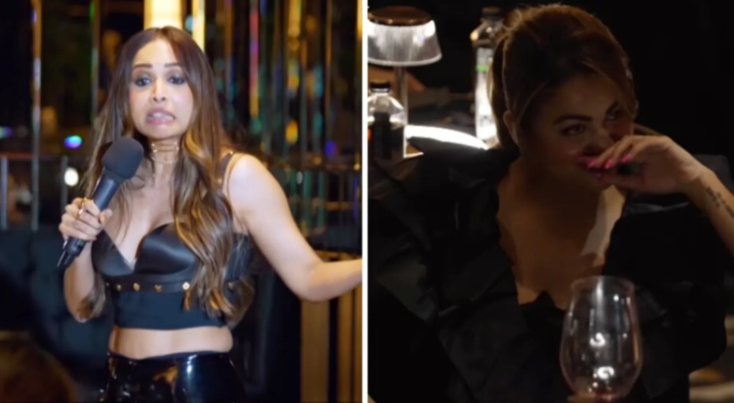 Moving In With Malaika: Malaika Roasts Herself And Her Sister Amrita Arora In Standup Act

New Delhi: Malaika Arora has turned reality star now. She made her OTT debut with ‘Moving In Malika’ airing on Disney+Hotstar.

The latest promo of ‘ Moving In With Malaika’ is definitely a winner! In a clip shared by Disney+ Hotstar on social media, Malaika begins her act by calling out those obsessed with her ‘age’. She said it isn’t because she is ‘old’ but because she ‘looks like this’ as she is ageing. “Jalkukdi log (jealous people),” is what she called her trolls. She also addressed her divorce with ex-husband Arbaaz Khan when she said, “I have moved on, my ex has moved on, when the f will all of you move on?”

“My sister’s in the house! She’s the funny one. I’m the pretty one,” she said, extracting laughter from her audience. “She has a rich husband and I… am doing standup,” she joked.
Speaking about Arbaaz with Farah Khan she said, “I know how much you love him. He is a wonderful person. He let me be the person I am today. I feel a lot of me that I am today is also because of him because he let me be the person I am.”

“We drifted. We were too young. I was very young. I think I also changed. I also wanted different things in life. Somewhere I felt that was missing in my space and I needed to move on. I felt the only way I could do that is if I could actually probably let go of certain ties. I think today we are better people. We love and respect each other for the people that we are. We have a child together. So that is something that will never ever change. But I feel we are far better people. Then, I think we were very irritable. Very irritable people. We became angry, negative people,” Malaika said.

PM To Inaugurate Phase – I Of Samruddhi Mahamarg On Dec 11