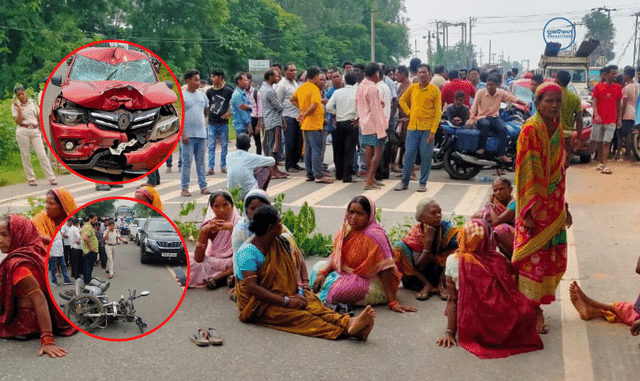 Motorcyclist Killed In Head-On Collision With Car In Jharsuguda

Jharsuguda: A motorcyclist was killed after a head-on collision with a car near Kumudapali Anand Samriddhi School under Jharsuguda Town Police Station on National Highway No. 49 on Tuesday.

The deceased has been identified as former sarpanch Falguni Patel (58) of Kolabira Block Paramanpur Panchayat.

Following this, tension erupted in the locality after scores of people blocked the road as a result vehicular movement came to a halt on the road stretch.

The road blockade was lifted after three hours after SDPO Nirmal Mohapatra and town police station officials assured to provide Rs 20,000 from Red Cross and compensation under the Harishchandra scheme. The owner of the car also pledged to provide Rs 80,000 to the family of the deceased.

According to information, Patel was going to Jharsuguda on a motorcycle, when it collided head-on with a car coming from the opposite direction near Kumudapali School. The collision was so intense that Patel died on the spot.

A case was registered in the Jharsuguda town police station and the two vehicles involved in the accident were seized while the body of the deceased was sent for post-mortem.