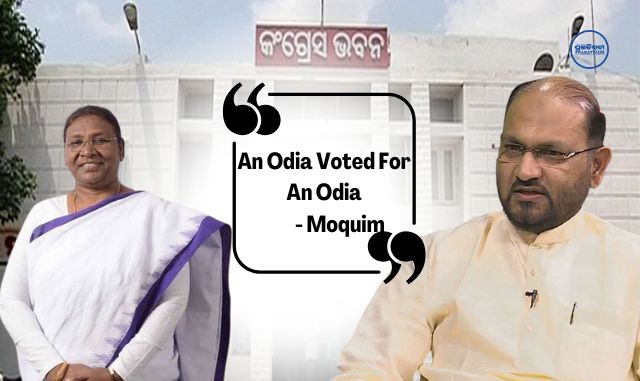 Bhubaneswar: While all lawmakers of Odisha Congress voted for the Opposition Party candidate Yashwant Sinha for the Presidential election, Cuttack-Barabati MLA Mohamad Moquim became an exceptional one.

Meanwhile, such an act of MLA Moquim has created an uproar among other Odisha Congress lawmakers after casting his vote for NDA candidate Draupadi Murmu.

Commenting on the matter, PCC President Sarat Pattnayak said, “No whip was issued to the MLAs but party high command had clearly notified Yashwant Sinha was our candidate and all had agreed to vote from him.”

Pattanayak further said that he is aware of the statements made by Moquim. “The matter will be discussed and put before the party high command. Whatever high command decides, we will abide by the decision on the issue,” he added.

Condemning Moquim’s move, Congress MLA Santosh Saluja said, “We should have voted as per party lines not by listening to our conscience. Several meetings were held and all MLAs of the party had assured to voted for Yashwant Sinha. We will bring the matter to the notice of party high command for necessary acton.”

Congress MLA Tara Prasad Bahinipati said, “Moquim is a senior Congress leader and we condemn his move. PCC President Sarat Pattnayak and other leaders had discussed the matter with all MLAs. We cannot say what prompted him to change stand.”

Meanwhile, Moquim’s move has not gone down well with the party’s other leaders. Senior Congress leader Narasingha Mishra said, “We had decided to vote for Yashwant Sinha. No whip is issued for Presidential Election.”

After casting his vote, Moquim said that voting for Murmu was his “personal decision”.

“I am a Congress MLA, but I have voted for NDA’s presidential candidate. It is my personal decision as I have listened to my heart, which guided me to do something for the soil,” he said.

While responding to a media query about whether the decision is an indication of inclination towards the ruling Biju Janata Dal (BJD), Moquim said, as there is no whip, the MLAs have the right to vote as per their wish.