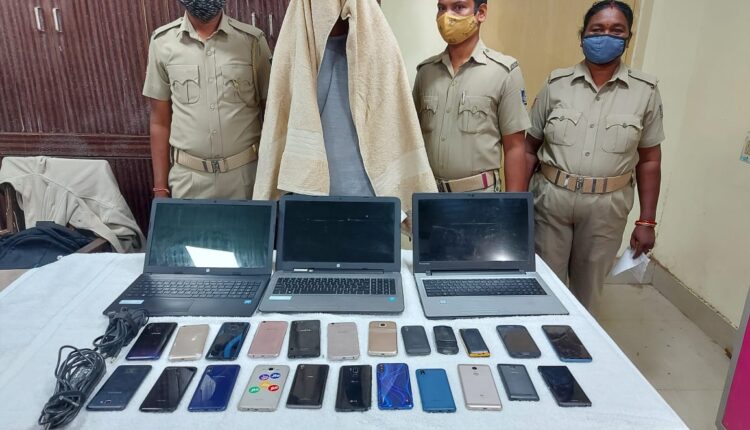 Bhubaneswar: Commissionerate Police arrested a person and forwarded him to court today on charges of stealing mobile phones and laptops in and around the city.

The accused has been identified as Sanjit Kumar Ray, of Jamugaon under Nuagaon PS in  Jagatsinghpur. He was currently staying at Santosh Lodge in Ashok Nagar.

According to a press note by CP, on December 1 last year, one Mithun Sahu complained that on early morning some unknown culprits entered into his house located in Unit-III area and stole his mobile phone. On the basis of the plaint, Kharvelnagar police registered a case (291/2020) and launched a probe

Following an investigation, the accused, Sanjit Kumar Ray, was apprehended with one stolen motorcycle and three numbers of mobile handsets at Master Canteen on Friday evening.

During sustained interrogation, the accused confessed his crime and gave recovery of another 20 numbers of mobile handsets, three laptops and another stolen motorcycle. He has kept the mobile handsets and the laptops in Santosh Lodge, Ashok Nagar for purpose of selling to the customers. He has committed similar offences inside Bhubaneswar City, the police said.

Three Laptops, 23 mobile phones, two motorcycles have been seized from his possession. The accused was arrested on Friday and forwarded to Court today, the police said and added that further probe is underway.