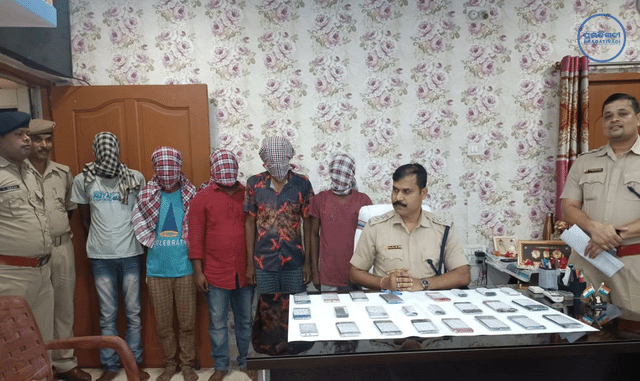 Rengali: Rengali Police on Friday busted a mobile theft gang in Sambalpur with the arrest of five persons and seizure of 24 stolen mobile phones from them.

Police said, Sanjeev Gardia (19), a resident of Kurlabahal, who was working at Shyam Metalics Guesthouse in Pandaloi on August 3, lodged a complaint alleging that while he was resting at around 11:00 pm, three youths—Tapan Gardia, Abinash Bag, of Purunu Basti and Ashok OPatra of Ludhapali – forcibly snatched away a smartphone from him.

Fortunately, Sanjeev was able to identify the looters and reached the Rengali police station to lodge a written complaint.

During interrogation in the police station, the accused confessed to their involvement in many other cases of snatching and looting mobile phones.

On the instructions of Sambalpur SP, a Special Team along with Rengali Police conducted raids at multiple locations and arrested two more accused, Rajkumar Bagh (22) and Sudhanshu Bhainsa (33) of Rengali Puruna Basti, involved in the mobile theft cases reported earlier.

A total of 23 stolen mobiles were recovered from Rajkumar and Sudhasanhu, including the mobiles of former Sanjeev Oppo, out of which 18 are smartphones and 5 are keypad phones.

In this connection, Rengali police station has registered a case (147/22), under Sections 457/380/34 of the Indian Penal Code and forwarded the accused to the court.

In the meanwhile, police are also returning the recovered mobile phones to the rightful owners after verifying the purchase bills.

Treat Patients with Respect, Do Your Job in a…