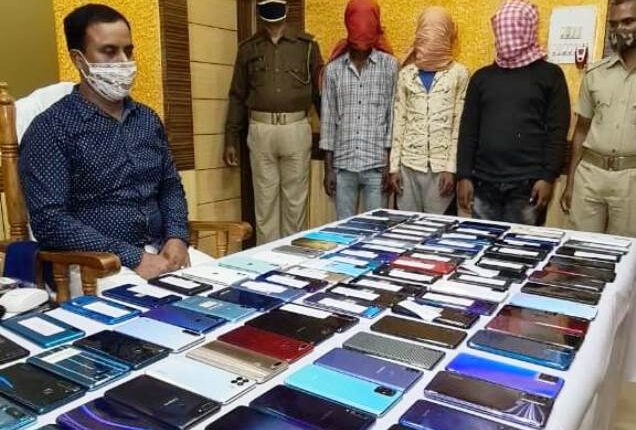 The accused were identified as Deepak Kumar (19), Kanchan Nunia (26) and Ankit Kumar Pawsar (19), all natives of the neighbouring Jharkhand state, the police said.

According to police, the accused persons had snatched the iPhone of one, Prabhakar Goenkha, near Kalpana Square on December 31. During investigation, the CCTV Footages were verified, information collected from sources, and the three accused persons identified.

Following a raid at a rented accommodation at Fishery Lane in Chintamaniswar, over 100 stole mobile phones were seized and three youths were apprehended.

During questioning, they confessed to have committed theft and robbery of mobile phones in different parts of Bhubaneswar including Khandagiri, Nayapalli, Chandrasekharpur, Badagada, Saheed Nagar and Mancheswar areas, said the police.

The three accused persons have been arrested and forwarded to the Court today. The case corresponds to Laxmisagar PS Case No.02, Dtd.02.01.2021, U/s- 392 IPC.  The case is now under investigation and efforts are on to detect the involvement of other accused persons, and the recovered mobile phones are under process of retrieval of IMEI in order to tag those, the police said in a press note.