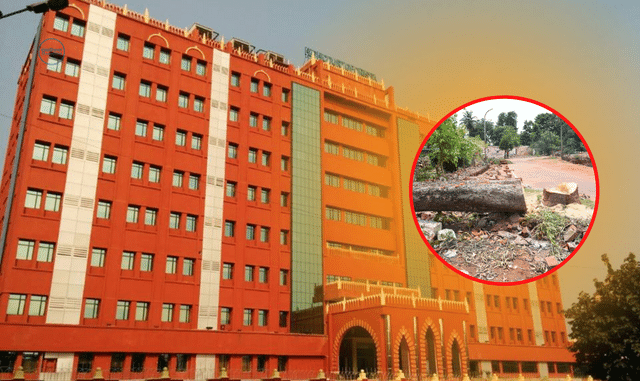 Cuttack: The Department of General Administration (GA) in the Odisha Government on Tuesday submitted an affidavit in the Orissa High Court stating that a total of 870 will be felled to pave way for the construction of quarters for the Members of the Odisha Legislative Assembly in Unit 4, Bhubaneswar, and 8,700 trees, that is 10 times of the trees being felled, would be planted.

Further, the State government informed the Orissa HC that tree felling and other activities have been done in compliance with the provisions and without any violations of laws.

The High Court directed the petitioner, social activist Jayanti Das, to file a response in this regard and fixed the next date of hearing on the matter for September 7.

In the affidavit, Itishree Rout, Deputy Director, Dept of General Administration, stated that it had been decided to fell 870 trees from the construction site of MLA quarters and the rest of the trees will be relocated to three different locations.

A meeting chaired by the Regional Chief Conservator of Forests was held on 2nd June 2022. It was attended by officials from the General Administration, OBCC, OFDC, Bhubaneswar City DFO, and local range officers. The number of trees in the area will be assessed again. After this assessment, the number of trees to be felled and the number of trees to be planted were discussed. Some trees will be relocated to Budha Park in Lumbini Vihar, Utkal Hospital in Niladri Vihar and Guru Kelucharan Park in VSS Nagar. The trees that will be relocated will be identified and planted elsewhere in the city.

According to the affidavit, a total of 170 Type-VI quarters will be built at the identified site and a sum of Rs 274.41 crore has been earmarked for the same. Similarly, Rs 285 crore will be spent construction of 105 Type-VII quarters. The OBCC is the nodal agency for the construction of these quarters.

A joint investigation was conducted by the GA department, Bhubaneswar Tehsildar and the forest department and it was proposed to cut down a total of 870 trees and plant 8,700 trees at a cost of Rs 68.70 lakhs. The OBCC has already deposited the amount with the City DFO.

While the state government plans to plant 10,000 trees in Bhubaneswar this year, the Bhubaneswar Municipal Corporation (BMC) will be planting 3,607 trees, the affidavit states.