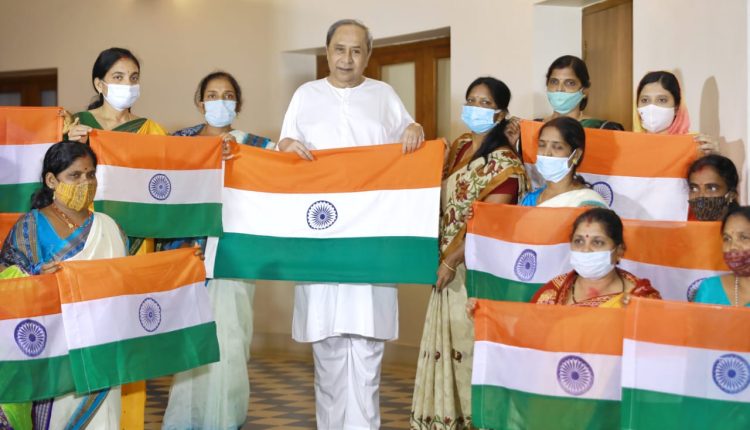 Bhubaneswar: On the momentous milestone marking the 75th anniversary of Independence, the ‘Har Ghar Tiranga Campaign’ has begun gathering momentum across the country. From 13th to 15th August 2022, national flags are bring hoisted atop residences and institutions.

In Odisha, counting on the entrepreneurial abilities of our Mission Shakti members and the extensive tailoring ecosystem established, the State Government entrusted the task of making 30 lakh flags to Mission Shakti SHGs & PGs across the state.

Today, i.e. 13.08.22, a representative group of Mission Shakti producer SHGs met Hon’ble Chief Minister, Shri Naveen Patnaik & presented him with a handmade Tricolour as a token of gratitude for reposing faith and entrusting them with the preparation of 30 lakh National flags. As the 76th Independence day draws closer, the Tricolour will be hoisted atop  millions of  homes as well as government, and private institutions/establishments. But the ones made & supplied by Mission Shakti women SHG members hailing from various corners of Odisha are going to be quite exceptional, as  the dedication and love that has gone into the making of each and every one of them is truly commendable.

Under the visionary leadership of Hon’ble Chief Minister Shri Naveen Patnaik, Mission Shakti has been vital in reinforcing the commitment to women’s empowerment in Odisha. Growing into one of the most successful programmes in the state, the initiative has managed to organise 70 lakh women, into more than 6 lakh self-help groups. Over the years, these groups have taken up numerous activities, strengthening their socioeconomic status as well as contributing towards strengthening myriad initiatives of the Government. Last year, in a historic step, the Government of Odisha  set up a dedicated Department of Mission Shakti to bring synergy across all the SHG-centric government initiatives, deepening the engagement of lakhs of women at the grassroots levels & ensuring last-mile delivery of sustainable livelihood opportunities to the women SHGs.

Although a mammoth task and a race against time, Mission Shakti members rose up to the challenge and accepted the task. The pre-established tailoring ecosystem proved critical in support.

The groups engaged in flag making have all been proficiently trained with help of the Department of Mission Shakti and are highly experienced in running tailoring units at large scale and independent levels both. Industrial-quality sewing machines were utilised by groups across the state, avoiding any sort of compromise with quality. More than 10 thousand members from around 500 SHG/PGs across 22 districts of the state were committed to produce 30 lakh tricolours to be hoisted from August 13-15. At an average rate of 3.5 to 4 lakh flags per day, the Mission Shakti members enlisted to accomplish this effort have managed to achieve their target on time. On the 10th of August, the last batch of the prepared tricolours were procured by the respective districts. Unique to Odisha the cost of flags is being borne by the State Government and the tricolour is being supplied free of cost to the people.

Azadi Ka Amrit Mahotsav At Pragativadi: Seminar Held On “State Of Republic In Democracy After 75 Yrs of Independence”