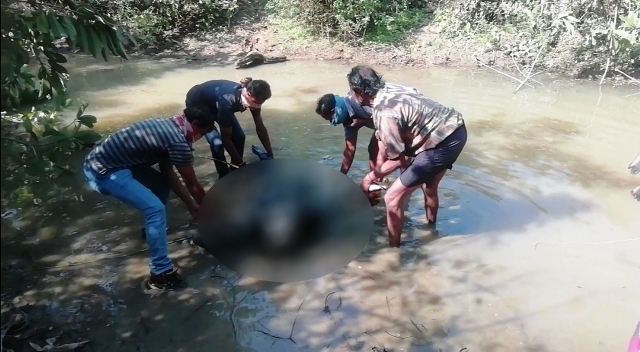 Bhanjanagar: Tarasingh police have detained three persons for interrogation after recovery of a decomposed body from nullah at Tangana village after 20 days.

Police sources said other two believed to be involved in the crime are absconding. A case was registered at Tarasingh police station under sections 270/20, 302 and 201.

The decomposed body, found dumped at Katara nullah under Tarasingh police station, is identified as that of Mithun Sah, son of Koka Sahu. His body was found after 20 days.

Police said the decomposed body was tied with stones. Tarasingh PS officer in charge Sabyasachi Malla said police are investigating as to why the youth was killed in a such a brutal manner.

Reports said on December 2, Mithun had gone out of home with two of his friends but did not return. None had a clue for his missing.

Ganjam SP Brijesh Rai has directed Tarasingh police to go into details about the matter and ascertain who were involved in the heinous act.

Police have roped in scientific team and sniffer dogs to hunt down the culprits. Sources said that the sniffer dog has traced to one youth’s house of Tangana village and two were rounded up from Bhubaneswar.