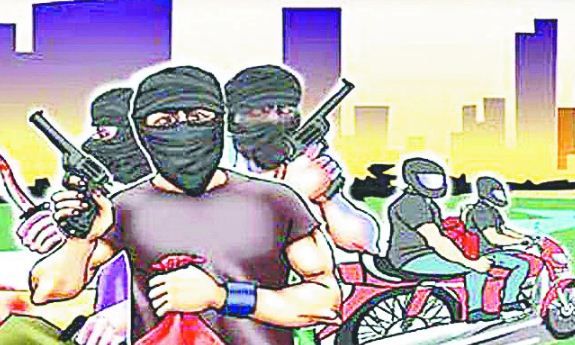 Narasinghpur: Three unidentified miscreants today entered the Canara Bank branch in Godibandha villager under Kanpur Police Station limits in Cuttack district and made away with Rs 1.5 lakh from a customer at gunpoint.

According to reports, two of them entered the bank posing as customers and targeted a person who had come to deposit the amount in the bank.

The miscreants then put the customer at gunpoint and snatched away the bag containing Rs 1.5 lakh. In the meanwhile, a home guard of Kanpur police station, Nirmal Sahoo, who was present in the bank for some work, tried to apprehend the looters.

However, during the brawl, the miscreants attacked the home guard with a machette before fleeing the spot on a motorcycle. Sahoo sustained injuries on his hand in the attack.

On intimation, Kanpur police reached the spot and initiated an investigation.

It may be mentioned here that a few days ago three unidentified men had looted Rs 1 lakh at gunpoint from SBI’s CSC Centre at Kamaldeipur. The modus operandi of the looters coincide with today’s loot incident.

Though Narasinghpur police have acquired the CCTV footage of the entire loot incident, no arrests have been made in this regard.